VATICAN CITY (REUTERS) - Pope Francis has accepted the resignation of Cardinal Ricardo Ezzati as archbishop of Santiago, the highest-ranking member of the Catholic Church in Chile, who has been caught up in the country's sex abuse scandal.

The decision to accept Ezzati's resignation, announced in a Vatican statement on Saturday (March 23), comes at a time of sustained criticism of the Church's response to a decades-long sexual abuse crisis.

Victims of sexual abuse by clergymen say a top-level conference at the Vatican last month failed to come up with concrete measures to tackle the issue.

On March 13 an Australian court sentenced former Vatican treasurer Cardinal George Pell to six years in prison for sexually abusing two choir boys in Melbourne - the most senior Catholic to be convicted for child sex offences. Pell is appealing.

Ezzati, 77, faces multiple charges of cover up, including some relating to the case of Oscar Munoz, a former top aide to the Santiago Archbishopric, who is facing trial on charges he abused and raped at least five children. He denies wrongdoing.

In October, Ezzati exercised his right to remain silent after being summoned for questioning by a state prosecutor over the allegations.

His resignation brought to eight the number of bishops who have stepped down since all of the country's 34 bishops offered their resignations en masse during an emergency meeting with the pope last May over allegations of a cover-up. 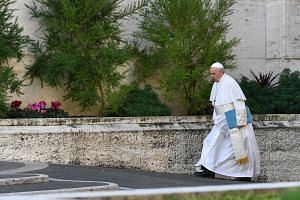 The May meeting was held after Vatican investigators produced a 2,300-page report alleging that senior Church officials in Chile had failed to act on abuse claims and in some cases hid them.

Despite his resignation as archbishop of the Chilean capital, Ezzati will keep his title of cardinal. Until he turns 80, he also will be eligible to enter a conclave to elect a new pope after Francis' death or resignation.

The Vatican said the pope had named Bishop Celestino Aós Braco of the Chilean city of Copiapó, as "apostolic administrator" to run the Santiago archdiocese until a new archbishop is named.

Apart from the eight active bishops who have resigned in Chile, last year Francis defrocked two other Chilean bishops who had been accused of molesting children.

The pope also defrocked Father Fernando Karadima, an 88-year-old Chilean priest who was accused of sexually abusing teenage boys over many years and who was at the centre of the Chilean abuse scandal.

On Monday, Cardinal Philippe Barbarin, the French Roman Catholic archbishop of Lyon, who a French court convicted of failing to report sexual abuse charges, offered his resignation to the pope, but Francis turned it down.

Church authorities in Poland last week issued a study showing that almost 400 children had been sexually abused by clergy between 1990 and 2018.