LIMA (REUTERS) - Peru's former authoritarian leader Alberto Fujimori on Thursday (Oct 4) appealed to current President Martín Vizcarra and to judges not to return him to prison because his "heart would not cope."

The former president, 80, spoke from a private clinic where he is undergoing treatment for heart disease and under police guard, in a video address aired on Peru's independent Canal N cable television station.

"I want to ask the president of the republic and members of the judiciary one thing only: Please, don't kill me," Fujimori said. "If I return to prison, my heart will not cope. It is too weak to go through the same thing again."

The former strongman also urged the current authorities not to use him as a "political weapon" since he had "no forces to resist."

Fujimori was transported by ambulance to a local clinic on Wednesday after a judge annulled a pardon granted to him last year and ordered his immediate capture and return to prison over human rights abuse allegations.

The ruling by Supreme Court Judge Hugo Nunez marked the latest reversal in fortunes for Fujimori, an agricultural engineer who rose to the presidency on a populist platform in 1990 and a decade later resigned by fax from his parents' homeland of Japan as accusations against him mounted.

Following his extradition to Peru in 2007, Fujimori was sentenced to 25 years in prison for commanding death squads that massacred civilians in a counterinsurgency campaign during his right-wing government. He was later found guilty of corruption. 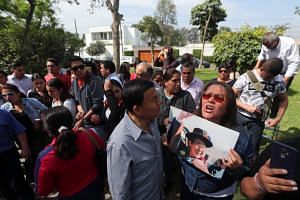 Fujimori's attorney Miguel Perez on Wednesday filed an appeal and requested a suspension of the arrest order, on the grounds of his client's failing health.