TOKYO (AFP) - Panamanian President Juan Carlos Varela called on Tuesday (April 19) for global efforts to tackle the "Panama Papers" scandal, insisting it is not a problem just for his country but the international financial system as a whole.

Panama is scrambling to avert redesignation as a tax haven that assists money laundering after the disclosure of the offshore dealings of many of the world's wealthy, famous and infamous. They came to light when millions of documents covering nearly 40 years of business were leaked from the archives of the Panamanian law firm Mossack Fonseca.

The revelations have had far-reaching political consequences, already bringing down the Icelandic prime minister and Spain's industry minister, while forcing others to explain their financial dealings. 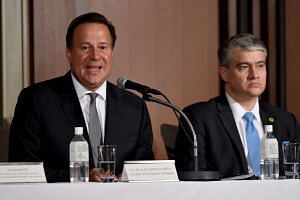 "(The)'Panama Papers', it is not about Panama," Varela, who arrived in Japan on Sunday, told an investment seminar in Tokyo.

"It's about a global problem that is tax evasion and also the use of the financial systems and legal system," he added.

Varela said his country is willing to cooperate with an Organisation for Economic Cooperation and Development initiative to share tax information, saying: "We have the door open to do it in a multilateral way." He also reiterated his demand that France drop Panama from a blacklist of tax havens.

Following the recent disclosures Paris has put Panama back on its national list of Uncooperative States and Territories. It had removed it in 2012.

Such an international designation would deal a heavy blow to Panama's vital financial services sector. The Panamanian government recently imposed reforms to move it towards global transparency standards.

Varela said he plans to announce a bilateral taxation scheme with Japan under OECD standards on Wednesday following his meeting with Prime Minister Shinzo Abe.

Acting in the wake of the scandal, finance chiefs of the Group of 20 meeting in Washington on Friday supported proposals requiring authorities to share the identities of shell companies' real owners.

They also backed creating a blacklist of international tax havens that do not cooperate with information-sharing programmes.

On Monday, Varela said in an interview with Kyodo News agency that Panama has "decided to join the common reporting standards", referring to the measures on exchanging financial account information with tax authorities set by the OECD.

OECD head Angel Gurria said last week that Isabel De Saint Malo, vice president of the Central American country, had called him to express willingness to cooperate with his organisation.