MEXICO CITY • Mexicans laboured amid ruins to revive their capital the day after an earthquake left hundreds dead, reduced buildings to rubble and brought one of the world's largest cities to a halt.

The magnitude-7.1 quake that struck on Tuesday killed at least 225 people, nearly half of them in the capital, 32 years to the day after a devastating 1985 quake. It happened even as Mexico was still reeling from a powerful tremor that killed nearly 100 people in the south of the country less than two weeks ago.

The earthquake toppled dozens of buildings, tore gas mains and set off fires across the city and other towns in central Mexico. Falling rubble and billboards crushed cars.

In a live broadcast, one newsreader had time to say "this is not a drill", before weaving his way out of the buckling studio.

Parts of colonial-era churches crumbled in the state of Puebla, where the United States Geological Survey put the quake's epicentre some 158 km south-west of the capital, at a depth of 51km.

Around the same time that the earth shook, Mexico's Popocatepetl volcano, visible from the capital on a clear day, had a small eruption. On its slopes, a church in Atzitzihuacan collapsed during mass, killing 15 people. 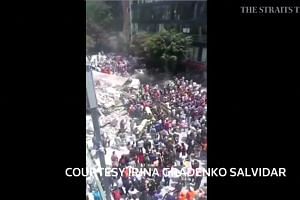 Many join search for trapped survivors

The destruction revived haunting memories in Mexico on the anniversary of the 1985 quake that killed more than 10,000 people, the disaster-prone country's deadliest ever. Tuesday's quake struck just two hours after Mexico held a national earthquake drill, as it does every Sept 19 to remember the 1985 event.

In Mexico City, a metropolis of some 20 million people, thousands of residents in the hardest-hit areas spent the night at hotels or on the couches of friends or family, and it was unclear when their homes - if they still stood - could be safe to live in again.

Shelters were opened throughout the region to help house the displaced as crews continued to dig for survivors, particularly at the Enrique Rebsamen elementary school in the south of the city. Among the twisted concrete and steel of the school, soldiers and firefighters found the bodies of at least 22 children and two adults, while another 30 children and 12 adults were missing.

Hundreds of emergency workers spent the night pulling rubble from the ruins with their bare hands under the glare of floodlights.

Yesterday morning, the workers said a teacher and two students had sent text messages from within the rubble. Parents clung to hope that their children were alive.

"They keep pulling kids out, but we know nothing of my daughter," said 32-year-old Adriana D'Fargo, her eyes red, who had been waiting for hours for news of her seven-year-old. Mexican President Enrique Pena Nieto visited the school on Tuesday night.

President Halimah Yacob said she was "deeply saddened by the loss of lives and devastation" and expressed Singapore's "sincere sympathies and condolences" in a letter to Mr Pena Nieto.

In Rome, Pope Francis told pilgrims he was praying for the victims, the wounded, their families and the rescue workers in the majority-Catholic country. "In this moment of pain, I want to express my closeness and prayers to all the beloved Mexican people," he said.

With power out in much of the city overnight, the work was carried out with flashlights and generators.

Mr Moises Amador Mejia, a 44-year-old employee of the civil protection agency, worked late into the night looking for people trapped in a collapsed building in the Condesa neighbourhood.

He said: "The idea is to stay here until we find who is inside. Day and night."

In Obrera, central Mexico City, people applauded when rescuers managed to retrieve four people alive, with cheers of "si se puede" - "yes we can" - ringing out.

A version of this article appeared in the print edition of The Straits Times on September 21, 2017, with the headline 'Mexico's capital in ruins, with buildings reduced to rubble'. Subscribe
Topics:
More
Whatsapp Linkedin FB Messenger Telegram Reddit WeChat Pinterest Print Copy permalink