WASHINGTON • Mexico can reach an agreement with the United States to resolve a dispute over migration that prompted US President Donald Trump to threaten punitive tariffs, Mexican officials said yesterday as diplomatic talks were set to begin in Washington.

Mexican officials spoke to reporters as a senior Mexican delegation prepared to start discussions with their US counterparts. Mexico's Foreign Minister Marcelo Ebrard said if Washington imposed tariffs on Mexican imports, it could be counterproductive to stopping immigration flows across the US-Mexico border.

Fighting to stave off punitive tariffs announced by Mr Trump, Mexico will likely be pushed to do more to hold back Central American migrants.

Speaking at his regular morning news conference yesterday, Mexican President Andres Manuel Lopez Obrador reiterated that he believed a deal could be reached to resolve the dispute, and that it was in the interests of both countries.

Mr Trump said he will apply tariffs of 5 per cent on all Mexican goods from next Monday, and increase the rate in coming months to 25 per cent if Mexico does not substantially halt illegal immigration across the US-Mexico border, which is at a decade high this year.

Global equities tumbled after Mr Trump's unexpected threat last week against the US' biggest trade partner, as investors feared his aggressive trade diplomacy could tip the US and other major economies into recession.

With just a week until the first tariffs bite, the delegation led by Mr Ebrard may have a hard time convincing US officials that Mexico is doing enough on immigration to avoid tariffs, despite having signalled in recent days that it was prepared to further tighten security. 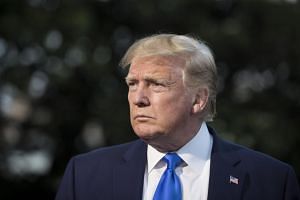 The US-Mexico talks were slated to kick off yesterday with a meeting between Mexican Economy Secretary Graciela Marquez and US Commerce Secretary Wilbur Ross. Mr Ebrard will meet US Secretary of State Mike Pompeo tomorrow.

On Sunday, Mr Trump called Mexico an "abuser" of the US, and said he wanted action, not talk.

Mexico has signalled it would retaliate against the tariffs, with targets likely to include farm products on states supporting Mr Trump.

In a possible sign of US priorities in the talks, which are due to run until at least tomorrow, US Acting Secretary of Homeland Security Kevin McAleenan said on Sunday that Mexico should deploy more personnel to interdict illegal migrants along a 241.4 km stretch of border with Guatemala.

Mr McAleenan also said Mexico should bolster its own immigration screenings along its southern border, crack down on networks transporting migrants and enable more migrants to wait in Mexico while they apply for asylum in the US.

Since January, the government of Mr Lopez Obrador has ramped up detentions and deportations, but that has not been enough to stop the growing tide of families reaching the US, mainly from Guatemala and Honduras.

The ultimatum from Mr Trump is the biggest foreign policy test to date for Mr Lopez Obrador.

In a series of tweets on Sunday, Mr Trump extended his demands on Mexico beyond immigration, demanding that it stop an "invasion" of drug dealers and cartels.

Mexico's economy, which is heavily reliant on exports to the US, shrank in the first quarter, and would suffer a lot more if Mr Trump were to jack tariffs up all the way to 25 per cent.

A version of this article appeared in the print edition of The Straits Times on June 04, 2019, with the headline 'Mexico confident of deal with US to stave off tariffs over migrants'. Subscribe
Topics:
More
Whatsapp Linkedin FB Messenger Telegram Reddit WeChat Pinterest Print Purchase Article Copy permalink