"They should withdraw this ultimatum. No one can give us an ultimatum," Mr Maduro said in an interview with CNN Turk aired yesterday.

Mr Maduro also said he was open to dialogue and that meeting US President Donald Trump was improbable but not impossible.

Washington, which has recognised Mr Guaido as Venezuela's leader, on Saturday urged the world to "pick a side" and financially disconnect from Mr Maduro's government.

Britain, Germany, France and Spain all said they would recognise Mr Guaido if Mr Maduro failed to call fresh elections within eight days, an ultimatum Russia said was "absurd" and the Venezuelan Foreign Minister called "child-like".

Mr Maduro retains the loyalty of the armed forces, though Venezuela's top military envoy to the US defected to Mr Guaido's side on Saturday. Both Mr Guaido and Mr Maduro have called for demonstrations this week, raising fears of further violence. 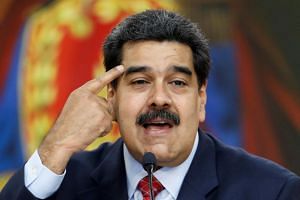 Separately, Mr Maduro has softened his demand that all US embassy staff withdraw from the country, asserting that he wanted his own diplomats "to defend Venezuelan interests in the US".

Instead, he said the two countries will seek an agreement to replace the embassies with "interest offices" in their respective capitals within 30 days.