Embattled President recalls diplomats in US after Washington backs his challenger

CARACAS • Venezuela's powerful military has thrown its weight behind President Nicolas Maduro as the US-backed opposition leader Juan Guaido pressed a direct challenge to his authority, and the fate of the crisis-wracked country hung in the balance.

As the death toll from days of street protests jumped to 26, a defiant Mr Maduro announced the closure of Venezuela's embassy and consulates in the United States, a day after President Donald Trump's administration declared his regime "illegitimate".

The oil-rich but economically devastated country was plunged into uncertainty on Wednesday when Mr Guaido, the 35-year-old head of the National Assembly, proclaimed himself "acting president" - earning swift endorsement from Washington and a dozen regional powers, including Brazil, Argentina and Colombia.

Both Russia and China have thrown their weight behind the embattled Mr Maduro, who has also retained the support of Mexico, Cuba and Bolivia.

Mr Maduro's re-election last year was contested by the opposition, and criticised internationally - but the socialist leader has until now retained the loyalty of the powerful military.

Flanked by military top brass on Thursday, Defence Minister Vladimir Padrino, himself a general, declared the 56-year-old Mr Maduro "the legitimate president" - and vowed to defend his authority against an attempted "coup d'etat". 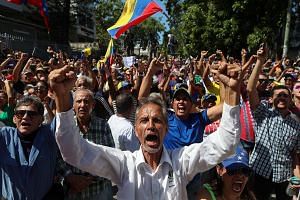 Call US move on Venezuela what it is - regime change

And the Supreme Court - made up of regime loyalists - doubled down by reaffirming its allegiance to Mr Maduro's "legitimate authority."

"A coup is brewing in Venezuela with the consent of foreign governments," charged the court's president, Judge Maikel Moreno.

Meanwhile, a top US official said on Thursday that the US is seeking to ensure that Venezuelan oil revenue goes to Mr Guaido, and to cut off money from Mr Maduro.

Although short on details, the announcement signals that Washington is willing to go beyond traditional diplomatic measures and will seek to drain cash from Mr Maduro's government, which is already struggling under an unprecedented economic meltdown.

Such a move would significantly strengthen the hand of Mr Guaido.

"What we're focusing on today is disconnecting the illegitimate Maduro regime from the sources of his revenues," National Security Adviser John Bolton told reporters at the White House.

"We think consistent with our recognition of Juan Guaido as the constitutional interim president of Venezuela that those revenues should go to the legitimate government."

In a Skype interview with Univision, Mr Guaido said he did not rule out including Mr Maduro in an amnesty he is offering military and civilian officials who lead a transition in Venezuela. But he said the option would have to be evaluated because, he said, Mr Maduro is responsible for the death of protesters.

He said he would work to guarantee humanitarian aid and implement new economic measures to rachet up pressure.

"Our challenge is to secure free elections, and we want them as soon as possible. But we are living in a dictatorship," he said, from an undisclosed location.

Eurasia Group analysts noted that while international recognition of Mr Guaido as Venezuela's interim president cemented his position as the main opposition leader, he had failed to win over senior elements of the military.

In that light, "Maduro's fall does not appear imminent", the consultancy's analysts wrote.

In Washington, Secretary of State Mike Pompeo kept up the pressure on the leftist leader, as the US called for an emergency UN Security Council meeting on the crisis.

"The time for debate is done. The regime of former president Nicolas Maduro is illegitimate," Mr Pompeo said in a speech to the Organisation of American States.

A furious Mr Maduro on Wednesday issued US diplomats a 72-hour deadline to leave the country, and on Thursday, said he was recalling all Venezuelan diplomats from the US.

The US State Department ordered its non-emergency staff to leave Venezuela but refused to comply with a full expulsion, saying it would maintain diplomatic ties with "the government of interim President Guaido".