MEXICO CITY (AFP) - "Stubborn" is among the many insults that have been hurled at Andres Manuel Lopez Obrador, the veteran leftist who swept to victory in Mexico's presidential election Sunday.

He considers it a compliment.

The man, who also is known by his initials AMLO, kicked off his third presidential bid vowing to use his headstrong personality to fight for the change that so many Mexicans are demanding this election year.

"With that same conviction, I will act as president... stubbornly, obstinately, persistently, bordering on craziness, to wipe out corruption."

Those close to him can vouch for that.

Lopez Obrador, 64, is one of the most divisive figures in Mexican politics: his critics hate him as fervently as his fans love him.

But his vows to fight for a "radical turn" in Mexico worked in a nation fed up with seemingly endless corruption scandals and a horrifically violent drug war.

According to exit polls, the former Mexico City mayor won the vote by a large margin, leading his rivals to concede defeat.

Lopez Obrador's fiery attacks on the "mafia of power" tapped the frustrations of voters sick of the two parties that have governed Mexico for almost a century: the Institutional Revolutionary Party (PRI) and the National Action Party (PAN). That phrase, according to New York Times, is the shorthand for the small, insular Mexican political and business class that has dominated the country for generations and, he said, used its position to enrich itself and its friends.

But the two-time presidential runner-up also managed to present a cooler side this time around, answering criticism with humour and laughing off dire warnings about how he would wreck Latin America's second-largest economy. 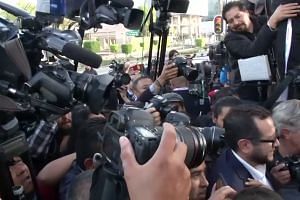 When enemies accused him of ties to Russia, he slyly turned the insult to irony, donning a Russian ushanka hat and calling himself "Andres Manuelovich".

When the three other candidates took turns attacking him during debates, he calmly stayed above the fray - at one point whipping out a chart with the latest poll numbers by way of rebuttal.

"I don't want to brag, but I humbly submit to you the latest poll," he said.

It turned out his confidence was justified.

As his rivals battled each other to sound the toughest on corruption, Lopez Obrador easily emerged as the anti-graft poster boy, vowing to lead by example.

"Not even Donald Trump has a plane like that," he was fond of saying.

He clashed with Mexico's business community, with some warning he would pursue Venezuela-style socialist policies.

Seeking to ease those fears, he appointed a team of market-friendly advisers and backpedalled on some of his most controversial proposals.

In fact, it is hard to guess just what his policies will actually be.

Many Mexicans are not quite sure what he represents, other than something new. In these elections, that proved to be enough.

However, Lopez Obrador also has a knack for shooting himself in the foot.

In 2006, he led for most of the race. Then he lost his cool in the home stretch and insulted the sitting president, Vicente Fox, as a "big-mouth" (loosely translated).

Many observers have said that may have cost him the race.

Lopez Obrador refused to accept his narrow defeat, proclaiming himself the "legitimate president" in a faux inauguration and setting up a protest camp in the heart of Mexico City that plunged the country into weeks of uncertainty.

He has never hesitated to burn political bridges.

A native of the southern state of Tabasco, he got his start in politics in the 1970s with the ruling PRI party - now his enemy.

He helped launch a left-wing breakaway, the PRD, in the 1980s.

He made an unsuccessful run for governor of Tabasco in 1994, then leapt to the national political scene when he was elected Mexico City mayor in 2000.

He left the job to run for president in 2006. After a second unsuccessful presidential run in 2012, he spurned the PRD to found his own leftist party, Morena - which now appears to be on track to become the dominant force in Mexican politics.

Lopez Obrador had vowed this would be his last campaign. If he lost, he said on the campaign trail, he would retire to "La Chingada," his ranch in the south. The name is another joke: the statement roughly translates as "go to hell." In the event, he will not be retiring there for the next six years.

The widower remarried journalist and writer Beatriz Gutierrez Muller in 2006. He has four sons.