CARACAS (Venezuela) • Calls from world leaders were piling up. The Prime Minister of Denmark was trying to reach him. So, too, was Mr Justin Trudeau, Canada's Prime Minister.

But Mr Juan Guaido, the young Venezuelan lawmaker leading an effort to topple the country's authoritarian government, did not appear to be in a hurry to speak with them, as he held the hand of a woman whose son had been gunned down by security forces during a recent night-time demonstration.

"This can't be in vain," Mr Guaido told the mother, Ms Ana Cecilia Buitrago, on Sunday morning as tears welled up in his eyes.

"My son had a big heart," Ms Buitrago, 58, said in a shaky voice. Her son, 29-year-old Jhonny Godoy, was killed on Jan 25 outside his modest home in Caracas. "This government has to fall so we can put an end to all this misery."

Mr Godoy's death came a few days after Mr Guaido, head of Venezuela's National Assembly, formally launched an audacious bid to force Mr Nicolas Maduro out of the presidency, arguing that Mr Maduro had "usurped" power by taking office on Jan 10, following an election that was broadly seen as rigged.

Since then, Mr Guaido, a lanky 35-year-old, has been working to shore up his support abroad while leveraging his escalating public support at home to get government insiders, in particular military leaders, to turn on Mr Maduro.

So far, more than 20 governments have recognised him as the country's interim president, including the United States, Canada and most of the rest of South America. Also, several European Union countries gave Mr Maduro a deadline of midnight on Sunday to call for free and fair elections. 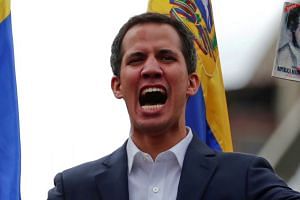 France and Austria have said they will recognise Mr Guaido once the deadline passes.

If Mr Guaido's gambit succeeds, he and allied opposition leaders will have pulled off an astonishing feat: presiding over a peaceful transition to democracy that they hope will put Venezuela on a path towards recovery following years of economic collapse, widespread graft and iron-fisted rule.

His success would be all the more remarkable considering the scrappy operation Mr Guaido and his allies have mounted to take down an armed government whose leaders stand accused of turning the state into a vast criminal enterprise.

As he tries to rally domestic and international backing, Mr Guaido has been crisscrossing Caracas with minimal security, at times weaving through traffic on the back of a motorcycle. He fields calls from world leaders, as well as diplomats and Venezuelan politicians, on a cellphone that gets a torrent of text messages, and his phone's battery seems always on the verge of dying.

If his sudden rise has been overwhelming, Mr Guaido shows no sign of feeling frazzled. His demeanour is calm as his aides, all volunteers, dart around him frantically.

"I sleep placidly," Mr Guaido said in an interview as his car stealthily moved through Caracas traffic, adding that he had learnt to sleep soundly under trying conditions when he and other opposition leaders staged a 15-day hunger strike in 2015, sleeping on cots on the street, to pressure the government to set a date for legislative elections.

But Mr Guaido realises the path he is on is full of hazards.

Mr Maduro still holds many of the levers of power, including the state broadcaster, a compliant judiciary, the country's military leaders and ruthless paramilitary forces known as colectivos.

"We're seeing progress, but it's not happening as quickly as we'd like," Mr Guaido said.

Oil sanctions imposed by the US last week will soon strangle the country's already devastated economy, which will most likely cause shortages of fuel and make food and medicine even more scarce.

Mr Guaido and his allies see the coming week, and the arrival of aid, as a potential make-or-break moment for a movement that has stirred hope for millions of Venezuelans, but has yet to take steps that meaningfully improve their lives.

"There are between 250,000 and 300,000 Venezuelans on the brink of death," he said as he dashed from his apartment in eastern Caracas to the home of Ms Buitrago.

If he does manage to take the presidency, Mr Guaido will have to try to tackle the country's enormous problems with no prior experience running a government.

But the next steps will be treacherous, even if Mr Guaido manages to topple Mr Maduro. "Things probably will get worse for the people of Venezuela before they get better when you actually start doing things for the greater good," Mr Cutz said.