CARACAS (NYTIMES) - Calls from world leaders were piling up. The prime minister of Denmark was trying to reach him. So, too, was Canadian Prime Minister Justin Trudeau.

But Mr Juan Guaido, the young Venezuelan lawmaker leading an effort to topple the country's authoritarian government, did not appear to be in a hurry to speak with them as he held the hand of a woman whose son had been gunned down by security forces during a recent nighttime demonstration.

"This can't be in vain," Mr Guaido told the mother, Ms Ana Cecilia Buitrago, on Sunday (Feb 3) morning as tears welled up in his eyes.

"My son had a big heart," Ms Buitrago, 58, said in a shaky voice. Her son, Mr Jhonny Godoy, 29, was killed on Jan 25 outside his modest home in Caracas. "This government has to fall so we can put an end to all this misery."

Mr Godoy's death came a few days after Mr Guaido, head of Venezuela's National Assembly, formally launched an audacious bid to force Mr Nicolas Maduro out of the presidency, arguing that Mr Maduro had "usurped" power by taking office on Jan 10, following an election that was broadly seen as rigged.

Since then, Mr Guaido, a lanky 35-year-old, has spent long days working to shore up his support abroad while leveraging his escalating public support at home to get government insiders, in particular military leaders, to turn on Mr Maduro.

While it is still far from certain that Mr Guaido will ever set foot in the presidential palace, the number of ordinary Venezuelans and foreign powers taking his side is growing.

So far, more than 20 have recognised him as the country's interim president, including the United States, Canada and most of the rest of South America. Several European Union countries gave Mr Maduro a deadline of midnight on Sunday to call for free and fair elections. France and Austria have said they will recognise Mr Guaido once the deadline passes. 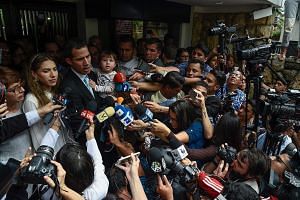 If Mr Guaido's gambit succeeds, he and allied opposition leaders will have pulled off an astonishing feat: Presiding over a peaceful transition to democracy that they hope will put Venezuela on a path towards recovery following years of economic collapse, widespread graft and iron-fisted rule.

His success would be all the more remarkable considering the scrappy operation Mr Guaido and his allies have mounted, seemingly overnight, to take down a heavily armed authoritarian government whose leaders stand accused of turning the state into a vast criminal enterprise.

As he tries to rally domestic and international backing, Mr Guaido has been criss-crossing Caracas with minimal security, at times weaving through traffic on the back of a motorcycle. He fields the calls from world leaders, as well as diplomats and Venezuelan politicians, on a cellphone that gets a torrent of text messages, and his phone's battery seems always on the verge of dying.

If his sudden rise has been overwhelming, Mr Guaido shows no sign of feeling frazzled. His demeanor is calm as a volunteer team of aides dart around him frantically. The only outward sign that this tumultuous new life is getting to him is the hoarseness in his voice. At night, when he stops taking calls and visits, Mr Guaido said, he has no trouble falling asleep.

"I sleep placidly," Mr Guaido said in an interview as his car stealthily moved through Caracas traffic, adding that he had learnt to sleep soundly under trying conditions when he and other opposition leaders staged a 15-day hunger strike in 2015, sleeping on cots on the street, to pressure the government to set a date for legislative elections. "It's an advantage."

But Mr Guaido realises the path he is on is full of hazards.

Opposition leaders had hoped that when Mr Guaido proclaimed himself the country's legitimate leader at a huge street rally, the chiefs of the armed forces would turn on Mr Maduro in short order. While there have been a handful of high-profile defections, the top military brass has publicly rallied behind Mr Maduro, which may portend a protracted stand-off.

"We're seeing progress, but it's not happening as quickly as we'd like," Mr Guaido said, adding that fear remains a strong impediment, particularly among low-level troops who support what the opposition is doing.

Indeed, Mr Guaido's success is far from guaranteed. Mr Maduro still holds many of the levers of power, including the state broadcaster, a compliant judiciary, the country's military leaders and ruthless paramilitary forces known as colectivos.

Those challenges notwithstanding, Mr Guaido says he sees a clear path to victory, even as his plan enters a perilous phase.

Oil sanctions imposed by the US last week will soon strangle the country's already devastated economy, which will most likely cause shortages of fuel and make food and medicine even more scarce.

Bracing for the destabilising effects of the sanctions, Mr Guaido and his allies in the international community said they intend to start pumping humanitarian aid into the country this week. Doing so would undermine Mr Maduro, who recently scoffed at the prospect by saying "we're not a country of beggars". Mr Guaido and his allies see the coming week, and the arrival of aid, as a potential make-or-break moment for a movement that has stirred hope for millions of Venezuelans, but has yet to take steps that meaningfully improve their lives.

"There are between 250,000 and 300,000 Venezuelans on the brink of death," Mr Guaido said as he dashed across town from his apartment in eastern Caracas to the home of Buitrago. "Literally, they have a death sentence if they don't get urgent attention."

If he does manage to take the presidency, Mr Guaido will have to try to tackle the country's enormous problems with no prior experience running a government.

Mr Fernando Cutz, a former White House official who worked on Venezuela policy, called Mr Guaido "the right man for the right moment". But the next steps will be treacherous, even if Mr Guaido manages to topple Mr Maduro.

"Things probably will get worse for the people of Venezuela before they get better when you actually start doing things for the greater good," Mr Cutz said. Managing an eventual transition, he added, "will be a monumental task that will require vision, skill, patience and a lot of time".

Since becoming the undisputed opposition leader in mid-January - emerging seemingly overnight - Mr  Guaido has filled his days with a slog of clandestine meetings with government insiders, rallies where fans show cult-like devotion and an endless stream of phone calls.

Since he proclaimed himself the country's rightful leader, Mr Guaido has lived under constant threat of arrest and violence and often wakes up wondering whether he will spend the coming night behind bars.

Intelligence agents did briefly detain him on Jan 13, and Mr Maduro has disparaged him as the treasonous figurehead of a plot orchestrated by the US to lay claim to Venezuela's vast oil reserves.

Mr Guaido argues that because Mr Maduro was elected in a rigged vote, the presidency is technically vacant, and that as the head of the National Assembly, he is constitutionally entitled to preside over an interim government until new elections are held.

Even if the armed forces were to throw their weight behind Mr Guaido, which would almost certainly spell the end of Mr Maduro's reign, Mr Guaido said he worried about the actions of the paramilitary forces that would be likely to stay loyal to Mr Maduro.

"We cannot allow that to proliferate," he said, drawing a parallel with the struggle that neighbouring Colombia has faced from guerrilla and paramilitary groups over the years. "It could portend very serious consequences, even in the short term."