HAVANA, CUBA (AFP) - A passenger plane operated by Cuba's state airline crashed shortly after takeoff with 110 people on board in Havana on Friday (May 18).

Here is what we know so far:

- The Boeing 737-200 of Cubana de Aviacion was rented from Mexican charter company Global Air, also known as Aerolineas Damojh, according to authorities in both countries.

- It crashed at 12.08pm in a field close to Havana's Jose Marti airport shortly after takeoff on a flight to the eastern city of Holguin, 670 kilometres away.

- There were 110 people aboard the plane, according to Global Air: 104 passengers and six Mexican crew members.

- Three survivors were pulled from the wreckage and are in critical condition in hospital, Cuban state newspaper Granma said.

- Cuban President Miguel Diaz-Canel, who visited the scene, told AFP there was a "high number" of victims. 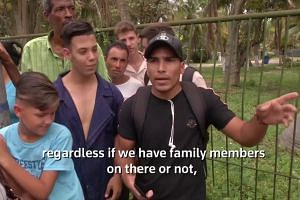 More than 100 killed in passenger plane crash in Cuba

- The plane was made in 1979, according to the Mexican government. It said Global Air had the necessary permits to lease the plane, which had successfully undergone inspections in November 2017.

- The plane was almost completely destroyed in the crash and subsequent fire.

- Dozens of ambulances and fire trucks rushed to the site, where a police cordon was set up.