SANTIAGO (REUTERS) - A Chilean appeals court ruled on Wednesday (March 27) that the Catholic Church should pay compensation to three victims in a sex abuse case involving former Santiago parish priest Fernando Karadima, a decision that could open the floodgates to similar lawsuits.

The men accuse Karadima of having sexually abused them decades ago, and the Church of having covered up that abuse.

The office of the Archbishop of Santiago said in a statement that the Church would not appeal the court's decision, acknowledging its "errors" and saying it had failed to "accompany the victims" in their time of need.

"(We) trust that this ruling will contribute to healing the suffering of Fernando Karadima's victims," the statement said.

The case could pave the way for a flood of civil lawsuits seeking monetary damages from the Latin American country's Catholic Church, and beyond. 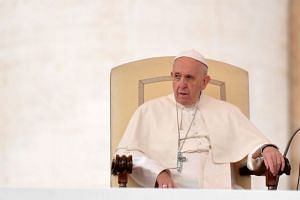 Chilean investigators have looked into about 120 allegations of sexual abuse or cover-ups involving 167 Church officials or workers.

The scandal last week prompted Pope Francis to accept the resignation of Cardinal Ricardo Ezzati, the archbishop of Santiago and the highest-ranking member of the Catholic Church in Chile.

Karadima, now 88 and living in a nursing home in the capital, has long denied accusations that he sexually abused the claimants. He was never charged by civilian authorities because the statute of limitations had expired.

He was, however, found guilty of sexual abuse in a Vatican investigation in 2011, and was defrocked by the Pope last year.