MONTREAL (AFP) - Canadian police announced on Sunday (July 28) that they had zeroed in on a small community in Manitoba in their hunt for two fugitive teens suspected to be involved in three murders.

The suspects, identified as Kam McLeod, 19, and Bryer Schmegelsky, 18, have been on the run for more than a week.

The authorities say they believe the two are behind the killings of  Australian Lucas Fowler, 23; his American girlfriend Chynna Deese, 24; and Canadian Leonard Dyck, 64.

Since last Tuesday, the village of Gillam, near Hudson Bay, has been the epicentre of an intense manhunt involving tracker dogs, a drone and armoured vehicles. The area features dense, sometimes nearly impenetrable, forest.

But on Sunday night, the Royal Canadian Mounted Police (RCMP) said on their Twitter account that they had sent multiple agents to York Landing, 204km south-west of Gillam, to investigate a tip that the two suspects were in or near the small community.

The RCMP informed the community to expect a significant police presence in the area.

In an earlier statement on Sunday, the RCMP said they had received more than 200 tips in the past five days.

"None has established that the suspects are outside the Gillam area," the statement said, though it added it was possible the two suspects had altered their appearances and slipped out of the region, possibly with the unwitting help of a resident in the area.

"Officers are searching cottages, cabins, waterways and along the rail line for any sign of the suspects," the statement added. Remote areas were searched by both air and foot.

The Canadian Air Force provided two planes to help with the search: a C-130 Hercules, manned with trained search-and-rescue spotters, and a CP-140 Aurora, a long-range patrol plane equipped with a sophisticated surveillance system, including infrared cameras and imaging radar. 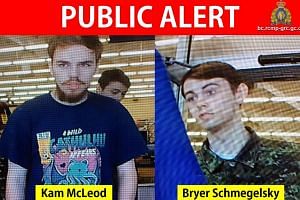 The region is particularly inhospitable, with wild animals including wolves and bears and swampy areas infested with mosquitoes. The police tweeted a photo of a polar bear spotted during their search last Saturday about 200km north of Gillam.

Locals say conditions are brutal and that the suspects, if on foot and unprepared, would have difficulty surviving for long.

The fugitives wound up in the Gillam region, located more than 1,000km north of Winnipeg, the capital of Manitoba, after driving more than 3,000km from British Columbia.

The teenagers were initially considered as missing after their car was found torched on July 19. But the police then discovered Mr Dyck's body near another burned-out vehicle believed to have been used by the pair.

The two young men have been formally accused in the murder of Mr Dyck, a botany professor, and are suspects in the killings of Mr Fowler and Ms Deese, whose bodies were found on July 15 along a highway in northern British Columbia.