TECUN UMAN, GUATEMALA (REUTERS) - Central American migrants entered Mexico from Guatemala in small groups on Saturday (Jan 18) after brief clashes earlier in the day when dozens of people tried to force their way across the border and were pushed back by Mexican security forces.

Hundreds of people who entered Guatemala from Honduras in recent days have been arriving at the Mexican border, with the bulk of them still advancing in a larger caravan, testing the resolve of Mexico to heed US demands to contain migrant flows.

President Donald Trump has threatened to hurt Mexico and Central American countries economically if they allow large groups to reach the US border. The latest exodus from Honduras has been accompanied by US border agents.

Mexican security officials closed the border at the crossing between Tecun Uman, Guatemala and Ciudad Hidalgo, Mexico, after the morning scuffles. But once order was restored, Mexico began letting in groups of around 20 at a time, a Reuters witness said.

Mexico has offered migrants work in the south, but those who do not accept it or seek asylum will not be issued safe conduct passes to the United States, the interior ministry said.

Guatemalan authorities say some 4,000 people have entered the country since Wednesday, the biggest surge since Guatemala, Honduras and El Salvador signed accords with the United States that increase pressure on them to deal with migrants.

Many of the migrants are seeking to escape poverty, violence or other social problems in Central America.

However, while a few have expressed an interest in staying in Mexico, most are eager to take their chances in the United States.

Mexican President Andres Manuel Lopez Obrador has launched a series of initiatives to create jobs in the poorer south.

Still, under his rule, Mexico's economy has significantly underperformed the United States, stagnating through 2019.

Television footage from the morning showed a group of migrants jostling and clashing with members of Mexico's National Guard on the bridge separating Guatemala from Mexico. 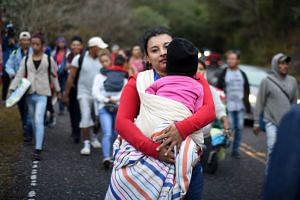 Women carrying small children could be seen at the front of the group on the bridge. Guatemala's government later issued a statement saying some people were using children to try to secure entry and offered to repatriate migrants who failed.

Mexican officials have so far controlled the situation more successfully than when a large caravan sought to force its way through at the same crossing in October 2018.

After being kept out, most migrants withdrew to Tecun Uman to await the arrival of the main caravan behind them.

About 400 of the migrants who entered Guatemala this week have been sent home, its government said.