The Sao Paulo hospital where Bolsonaro, 63, was convalescing since his Jan 28 operation said in its last medical bulletin on Saturday that he suffered an "episode of nausea and vomiting" but the president's clinical tests were all normal and he was without fever.

He was expected to be discharged on Wednesday or Thursday as originally scheduled, media reported.

Bolsonaro was stabbed by a mentally unstable lone assailant on Sept 6 while campaigning in a crowd in a street in the southeast state of Minas Gerais.

After emergency surgery to save his life, the far-right politician was forced to lay up for nearly a month - but saw his popularity rise because of public sympathy and the way the attack played into his hardline law-and-order agenda.

Bolsonaro went on to easily win October elections and took office on Jan 1.

He has vowed to crack down on crime and corruption in Latin America's biggest country. 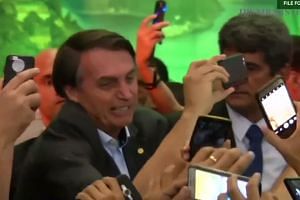 The leader, who is continuing his official paperwork from his hospital bed, was reported on Saturday to have been vomiting and required a feeding tube.

One of his sons, Carlos Bolsonaro, used the president's Twitter account to say his father on Sunday "woke up well and with energy... Only good news in the morning."

The Folha de Sao Paulo newspaper reported that, according to three medical experts it consulted, the vomiting Bolsonaro exhibited was not a normal reaction so many days after such surgery.

It cited the doctor who carried out the surgery, Antonio Macedo, as saying it was likely the result of a long and complicated operation.