Brazilian President Dilma Rousseff was suspended on Thursday (May 12) to face an impeachment trial, ceding power to her vice-president-turned-enemy Michel Temer in a political earthquake that ended 13 years of leftist rule in Latin America’s biggest nation.

The 68-year-old is accused of breaking budgetary laws by taking loans to boost public spending and to mask the sinking state of the economy during her 2014 re-election campaign.

In what could be her final address from the presidential palace, Ms Rousseff called the impeachment “fraudulent” and “a coup.”

“I may have made mistakes but I did not commit any crime,” she said a defiant speech.

Here's what you need to know about the crisis:

- On Dec 2, 2015, controversial lower house Speaker Eduardo Cunha formally opened the impeachment saga by accepting a petition from a group of lawyers. They accused Ms Rousseff of having illegally juggled accounts and taking loans in order to mask the depth of government shortfalls during her 2014 re-election. Ms Rousseff denied the charges and described the impeachment drive as a "coup", since she is elected. Ironically, many politicians, including Mr Cunha, are snared in separate criminal corruption probes linked to a vast embezzlement scheme at state oil company Petrobras. 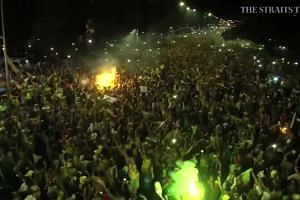 - Against a backdrop of huge pro- and anti-Rousseff street protests, Brazil's Solicitor General Jose Eduardo Cardozo made final arguments in the president's defence on April 4. He told deputies on a special committee that the charges did not amount to impeachable offences and that the process was fuelled by Mr Cunha's "desire for revenge."  Ms Rousseff also enlisted her predecessor and mentor, ex-president Luiz Inacio Lula de Silva, to spearhead the intense lobbying campaign for votes in the lower house. But Lula's political comeback hit a major snag when the Supreme Court suspended his appointment as a minister after accusations that he was taking the post to gain legal immunity from corruption charges.

- Ms Rousseff's fight against her opponents turned into a desperate, partisan struggle where she accused her Vice-President Michel Temer and Mr Cunha of conspiring against her. The Lower House, commanded by Mr Cunha, voted on April 17 to charge her with manipulating government accounts.

- With the case before the Senate, Ms Rousseff made a last-ditch bid to stop the impeachment proceedings by petitioning the Supreme Court, but this was rejected by  Justice Teori Zavascki . The decision all but erased the leftist leader’s hopes of avoiding suspension and trial.

What are the changes so far after the Senate vote?

- Following the Senate vote, Ms Rousseff  stepped down for a six-month period while the impeachment trial gets under way.

- Vice-President  Temer is now interim president and would be in the position until scheduled elections in 2018 if the impeachment goes through. Mr Temer may take power, but he is embroiled in a case at the country's electoral court that could eventually see him being forced to step aside for new elections. In addition, pro-Rousseff supporters have filed to start impeachment proceedings against Mr Temer.

- The impeachment trial against Ms Rousseff could be under way as Brazil hosts the Olympic Games in Rio from Aug 5 to 21. Angry street protests could heat up, further tarnishing Brazil's international reputation. And while the political paralysis in Brasilia deepens, nothing is being done to address Brazil's tough recession.