SAN PAULO • Brazil's President Michel Temer called an emergency meeting of key ministers after ordering troops to the border with Venezuela as regional tensions build over the exodus from its crisis-hit neighbour.

The move came after residents in the border town of Pacaraima in the Brazilian state of Roraima clashed violently with Venezuelan immigrants, driving them out of makeshift camps.

Roraima Governor Suely Campos made a plea to temporarily close the border and asked Brasilia to send security reinforcements to "face the increase in crime" she linked to Venezuelans in the region, particularly in its capital Boa Vista.

Instead, Mr Temer announced after meeting Cabinet members on Sunday, an increase from 31 to 151 in the contingent of soldiers helping to keep order at the border, and will speed up moving Venezuelan immigrants to other Brazilian states.

The situation in Pacaraima, on the opposite side of the border to the Venezuelan town of Santa Elena de Uairen, was calm following last Saturday's violence, in large part because almost all the Venezuelans had been forced out.

On average, some 500 Venezuelans cross daily into Brazil, but on Sunday, the "flow was much lower than the previous days", the spokesman said.

RAZED TO THE GROUND

It was terrible. They burned the tents and everything that was inside.

MS CAROL MARCANO, a Venezuelan who works in Boa Vista, capital of the Brazilian state of Roraima, on what locals did to the Venezuelan immigrants' makeshift camps.

"The city looks deserted today; it's very quiet because police reinforcements have arrived and the markets are reopening," said a local in the town of around 12,000 people, who did not wish to be identified.

Brazil has admitted tens of thousands of the roughly 2.3 million Venezuelans who have fled their oil-rich but cash-poor country in recent years as the exodus spurred by hyperinflation, chronic food and medicine shortages and rising insecurity picked up pace.

To curb runaway inflation, Caracas was set to roll out radical new measures yesterday, including issuing new banknotes after lopping five zeroes off the crippled bolivar.

Venezuelan President Nicolas Maduro's predecessor Hugo Chavez stripped three zeroes off the bolivar in 2008, but that failed to prevent hyperinflation.

While countries in the region have largely embraced Venezuelans, several governments have been overwhelmed by the scale of the immigration crisis, one of the largest Latin America has faced.

Ecuador declared a state of emergency earlier this month as the number of Venezuelans entering the country each day exceeded 4,000.

Brazil is the main destination for Venezuelans fleeing their country because it is one of the few countries in the region not to require them to produce a passport. 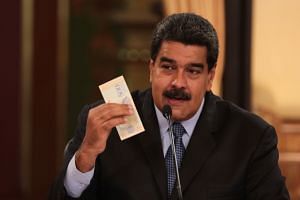 Venezuela's 95% devaluation of currency adds to chaos after drone attack 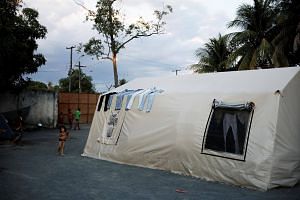 The latest tensions began early last Saturday, hours after a local merchant was robbed and severely beaten in an incident blamed on Venezuelan suspects, in Pacaraima, where an estimated 1,000 immigrants had been living on the street.

Dozens of locals then attacked the immigrants' two makeshift camps and burned their belongings, forcing the Venezuelans back across the border. Shots were fired, stores were shuttered and debris littered the streets.

"It was terrible. They burned the tents and everything that was inside," said Ms Carol Marcano, a Venezuelan who works in Boa Vista and was on the border returning from Venezuela.

Meanwhile, Caracas called on Brazil last Saturday to provide "corresponding guarantees to Venezuelan nationals and take measures to safeguard and secure their families and belongings".

Peru and Ecuador are halting immigrants at the border by requiring them to present passports - which many lack - instead of identity cards. Last week alone, 20,000 Venezuelans entered Peru, the authorities say.