RIO DE JANEIRO (AFP) - Four inmates involved in one of Brazil's deadliest prison riots suffocated while being transferred to another jail, officials said on Wednesday (July 31), taking to 62 the number killed over two days.

The men were among 46 prisoners removed from the Altamira Regional Recovery Centre in the northern state of Para on Tuesday, a day after clashes between rival drug factions left 58 dead, according to the latest death toll.

Sixteen inmates were decapitated in Monday's hours-long battle, but most died in a fire that engulfed part of the overcrowded facility that used converted shipping containers to house some of the inmates.

On Tuesday, 30 prisoners were handcuffed and put in four cells on a bus that was to take them to jails in the capital Belem, the state secretary for public security and social defence said in a statement.

Guards found the bodies of the four inmates, who belonged to the same gang, in two cells during a stop in Maraba city.

"The reasons for this unfortunate act are being investigated," the statement said. 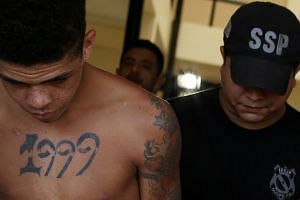 Hours earlier another body was found in debris inside the Altamira jail that took the death toll from Monday's riot to 58.

President Jair Bolsonaro, who took power in January on a promise to relax gun ownership laws and crack down on crime, tweeted on Wednesday for the first time on the mass killing.

"I watched the scenes of horror in the Para prison, but I also saw the macabre scenes carried out by those who died against humble and defenseless people," Bolsonaro tweeted on Wednesday.

"Outside the prisons there's also a war where practically only one side is armed."

It was the second major eruption of violence to rock the country's severely overpopulated and deadly prison system in as many months.

In May, at least 55 inmates were killed at several jails in the neighbouring state of Amazonas, in violence also blamed on an apparent drug trafficking gang dispute.

Experts estimate hundreds of prisoners are killed in Brazilian prisons every year, mostly in confrontations between rival gangs battling for control of one of the world's most important cocaine markets and trafficking routes.

Monday's fight involved members of Class A Command and one of the country's main crime groups, Red Command, officials said.

Brazil has the world's third-largest prison population after the United States and China, with 726,354 inmates as of June 2017, according to the latest official statistics released this month.

The population is far above the capacity of the nation's jails, which in the same year was estimated to be 423,242 inmates.

Conditions inside the prisons have been described as inhumane, with most inmates poor, black and with little formal education.

The Altamira Regional Recovery Center was no exception.

The National Justice Council, a government agency monitoring prisons, rated conditions inside the jail as "very bad" and said the facility was holding more than twice as many prisoners as it was equipped to handle.

It also had a shortage of guards.