SAO BERNARDO DO CAMPO, Brazil (BLOOMBERG) – Brazil’s former President Luiz Inacio Lula da Silva said he will turn himself in to police, finally ending a tense stand-off with the authorities after he ignored a court-ordered deadline to begin a prison sentence.

“I will comply with their order,” Lula said to a crowd of supporters gathered in front of his former union headquarters in a working-class suburb of Sao Paulo, vowing to “face them.”

In an emotional, almost hour-long speech, given after a Mass dedicated to his late wife, Lula said he will be proven innocent and that the prosecutors and judges lied in their accusations.

He also criticised the media and said his only crime was putting “the poor and black people in college.”

He did not give additional details about his surrender.

Lula’s decision marks the end of an extraordinary, almost-four-day saga that has gripped Brazil, a country bitterly divided over the charismatic 72-year-old who rose from poverty to the presidency. 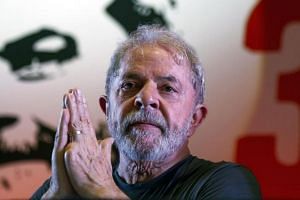 Brazil's top court rules that ex-president Lula can be jailed 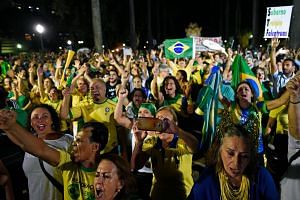 While he remains hugely popular among the millions of Brazilians he helped lift from poverty during the commodities boom that characterised his years in office, he has become equally loathed by many for the corruption and economic malaise that has marred his legacy.

As he was the front-runner for October’s presidential race, Lula’s arrest increases the unpredictability of the election.

While his hopes of a return to power are almost certainly shattered, the key question now is to what extent his imprisonment will influence October’s races.

A Supreme Court decision on Wednesday paved the way for his imprisonment, following a conviction for corruption and money laundering.

On Thursday, Sergio Moro, the judge who prosecuted him, ordered the ex-president to turn himself in by 5pm on Friday to begin serving a 12-year prison sentence.

The judge specifically vetoed the use of handcuffs by the arresting officers and wrote that a special detention area had been set aside for the former president.

Lula’s lawyers’ requests to delay or suspend the arrest were denied by higher court judges.

The former factory worker was convicted of receiving benefits from a construction company – including the upgrade of a beach-front apartment – as a reward for government favours.

He has denied wrongdoing and said the ruling is part of a strategy to stop him from becoming president again. He also faces a handful of other corruption charges.