SALAMANCA (AFP) - A suspected criminal gang left a fake bomb and threatening message for Mexican President Andres Manuel Lopez Obrador outside an oil refinery on Thursday (Jan 31), warning him to stop his crackdown on fuel theft.

The message, written on a bedsheet near the Salamanca refinery in the central state of Guanajuato, warned the leftist leader to withdraw the army and other security forces from the state.

"Otherwise I am going to start killing them, along with innocent people," said the message, signed by a group calling itself the Puro Cartel Santa Rosa de Lima.

It was accompanied by what appeared to be a bomb left inside a pickup truck outside the refinery. However, officials later said the package, which had a small light and numerous white wires, was a fake.

"There were no explosives in the abandoned pickup truck," presidential spokesman Jesus Ramirez told journalists. 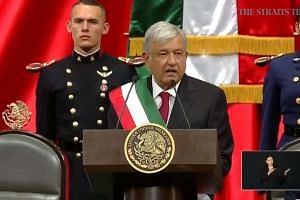 "Obviously this is connected to the anti-fuel theft operations."

The message also called for the release of suspects recently arrested as part of the government's crackdown.

Mr Lopez Obrador, an anti-establishment austerity crusader, famously disbanded the presidential guard when he took office. Security analysts have warned his safety could be at risk.

The president's standard response is, "The people will protect me."