PANAMA CITY (AFP) - Pope Francis told a global gathering of young Catholics on Thursday (Jan 24) that meaningful service was key to attracting a new generation of faithful, rather than trying to make the Church more "fun" or "cool".

The 82-year-old pope received a rock-star welcome by tens of thousands of young people when he arrived for the World Youth Day event at a palm fringed park on the shores of Panama Bay.

Dozens of young pilgrims held up a giant yellow, blue and red banner with the legend "Pray for Venezuela".

After arriving in his Popemobile, two young Panamanians accompanied the pope through a replica of the locks of the Panama Canal.

"We want to tell you not to be afraid," the pope said, urging them instead to go forward with "fresh energy and restlessness".

"To go forward, not to create a parallel Church that would be more 'fun' or 'cool' thanks to a fancy youth event, as if that were all you needed or wanted. That way of thinking would not respect either you or everything that the Spirit is saying through you. Not at all!"

Instead, in order to reawaken the Church's "constant freshness and youth" the pope emphasized "service to our brothers and sisters, and concrete service at that". 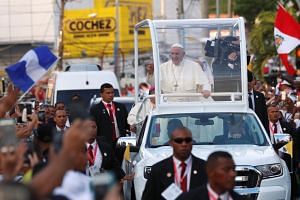 Francis earlier spoke out in defence of migrants, blasting "fears and suspicions" over migration in an address to Central American bishops, and he returned to the theme again here.

"By your actions and your approach, your way of looking at things," he told the young people, "you discredit and defuse the kind of talk that is intent on sowing division, on excluding or rejecting those who are not 'like us'".