LIMA (REUTERS) - Pacific Rim leaders said on Sunday (Nov 20) that they were committed to fighting "all forms of protectionism" and encouraged signatories of the Trans-Pacific Partnership (TPP) trade pact to continue supporting it despite fears that it may not have a future in its current form.

"We reaffirm our commitment to keep our markets open and to fight against all forms of protectionism," the leaders of the 21-country Asia-Pacific Economic Cooperation (Apec) group said in a closing statement after meeting in Peru.

Apec talks in Lima have been dominated by doubts over the future of free trade and in particular the TPP trade pact following the election of Mr Donald Trump as US president.

Mr Trump strongly criticised the TPP - which as it stands includes the United States but not China - during an election campaign notable for his strong criticism of US free trade deals. 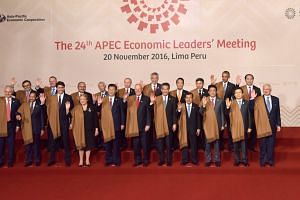 US President Barack Obama, speaking at a news conference, said he was already hearing calls for a less ambitious trade agreement that would exclude US workers and businesses.

Not moving forward with TPP would undermine the US position across the Asia-Pacific region, Mr Obama said at the end of the last stop of his final scheduled trip abroad as president.

Some leaders have suggested that the 12-nation TPP free trade pact could continue without the United States, while others have said that would be impossible without a complete renegotiation.

Another way forward might be a cosmetic change that would allow Mr Trump to support the accord without losing political face, New Zealand Prime Minister John Key suggested in a round table on Saturday.

In parallel, China has been selling an alternate vision for regional trade by promoting the Regional Comprehensive Economic Partnership (RCEP), which does not include the Americas.

Mr Kuczynski said that economic hardship had fuelled support for Mr Trump in the United States and the Brexit victory in Britain. "More than protectionism, it's a reflection of difficult economic conditions," Mr Kuczynski said.

The final declaration by the Apec leaders said: "We encourage that all regional undertakings, including TPP and RCEP, remain open, transparent and inclusive and draw on each other."

Both deals could be potential pathways to a wider regional trade agreement, known as the FTAAP or Free Trade Area of the Asia-Pacific, it said.

The final declaration acknowledged that economic growth had become uneven in recent years and inequality had risen, factors seen as key in a shift to isolationism in Western economies.

"While the complex global economic environment will continue framing our work, it also represents an opportunity to reiterate our commitment to build a dynamic, harmonious and open economy in the Asia-Pacific region," it said.