SANTIAGO (AFP) - A year after an abrupt US withdrawal left a fledgling 12-nation Pacific trade pact for dead, the 11 remaining states will sign a re-vamped deal on Thursday (March 8) aimed at slashing tariffs.

The agreement - rebranded as the Comprehensive and Progressive Agreement for Trans-Pacific Partnership (CPTPP) - has been championed as an antidote to growing US protectionism under President Donald Trump.

"We are not going to be derailed by Trump's decision" to withdraw the US, said Felipe Lopeandia, Chile's top trade negotiator, ahead of the ratification ceremony in Santiago.

After years of negotiations, the original deal - the Trans-Pacific Partnership, or TPP - was signed in February 2016 by 12 countries that border the Pacific Ocean.

But it fell victim to Mr Trump's "America First" policy, when he removed the pact's major linchpin before the deal could get under way.

The CPTPP aims to slash tariffs between the 11 members and foster trade to boost growth.

It will "send a political signal to the world and to the United States itself, that this is a global agreement," said Lopeandia.

Coming in the same week that Mr Trump risked a trade war over his decision to introduce tariffs on imported steel and aluminium, the deal is seen by some members as striking a blow against protectionism.

Washington's exit meant a drastic downsizing of the original agreement - which with US involvement represented 40 per cent of the global economy.

But the pact - though a diminished one involving 13.5 per cent of global GDP - remains hugely significant, according to Ignacio Bartesaghi of the Catholic University of Uruguay's business school.

"There is no trade agreement involving that number of countries, and one that has 30 chapters which deal with all the most modern topics of international trade," Mr Bartesaghi told AFP.

Last month, Mr Trump told the World Economic Forum in Davos that the US might return if it got a better deal. 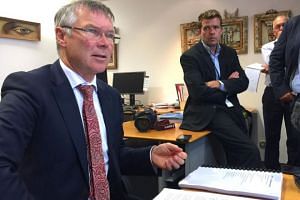 Final version of CPTPP trade deal released, rules pushed by US on ice

"Little by little, his advisers have managed to make Trump realise the role that the United States plays in Asia Pacific and the role played by the TPP in that region, not only in economic and trade terms, but in geopolitical terms," said Mr Bartesaghi.

But Japan, a key driver behind the revised pact, is skeptical.

"If the United States returns to a more positive attitude toward the TPP, it is something we will welcome (but) it would not be so easy" to change the agreement again, said Tokyo's chief negotiator Kazuyoshi Umemoto.

More than 20 provisions were suspended or changed in the new agreement, mostly rules over intellectual property originally inserted at the demand of US negotiators.

Analysts noted these provisions were not cancelled, however, with some suggesting the door is being left ajar for the US.

"The CPTPP will establish a new standard for other regional economic integration agreements, and even for future negotiations in the WTO (World Trade Organisation) and in Apec (Asia-Pacific Economic Cooperation)," said Chile's foreign ministry, which is hosting Thursday's landmark signing.

Chile said membership of the new pact will improve access to markets currently responsible for 17 per cent of its total exports.

The other two Latin American countries, Mexico and Peru, will also improve their access to countries on the other side of the Pacific, such as Vietnam and Malaysia.

"It means an increase in our potential market and the possibility that our people can access more products," said Mario Mongilardi, head of Lima's chamber of commerce.

The 11 states represent a market of 500 million people, greater than that of the European Union's single market.

The pact will come into force 60 days after it is fully ratified by six of the 11 members.