It is a leading health problem, but main parties' manifestos give it short shrift

Air pollution is a crisis facing India, which is home to seven of the world's 10 most polluted cities.

Multiple studies show it is a leading health problem, causing millions of deaths and children to grow up with reduced lung capacities.

Yet in the general elections currently under way, air pollution has failed to take off as a political issue.

It merits scant mention in the political discourse and little or none in election campaigns and rallies.

That the two main national parties, Bharatiya Janata Party (BJP) and Congress, have dedicated one paragraph each to pollution in their manifestos is being hailed by environmentalists as a good step.

The Congress party said it would recognise pollution as a "national public health emergency" in its manifesto, while the ruling BJP, in its 47-page election manifesto, also said it would continue with plans drawn up by the government to reduce pollution.

Pollution is not going to be an issue or a significant part of my vote... To my mind, there are bigger national issues to consider, including religious fundamentalism, lack of jobs... and suppression of rights. 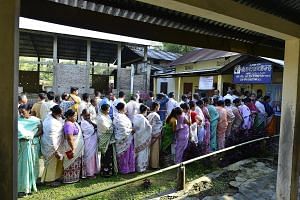 "We will convert the national clean air plan into a mission and we will focus on the 102 most polluted cities in the country,'' BJP said.

In January, the BJP government released the National Clean Air Programme, a five-year plan starting this year to reduce levels of PM2.5 and PM10 - pollutants measuring less than 2.5 microns and 10 microns in diameter levels respectively - by 20 per cent to 30 per cent of 2017 levels in 102 cities. They include the capital, New Delhi.

According to a study this year by Greenpeace and AirVisual, Gurugram - a Delhi satellite city - and Ghaziabad were the top two polluted cities.

Pollution levels have doubled in many cities over the past decade because of a lethal combination of factors: rapid industrialisation, an explosion in vehicle numbers, poor public transport, unchecked construction of homes in urban areas and weak enforcement of laws and regulation.

In Delhi, for instance, during winter months when pollution peaks as it is trapped in the atmosphere, PM2.5 levels have risen to six times over the safe limit.

A study published in Lancet Planetary Health said 1.24 million people in India died in 2017 due to pollution. Of these, 670,000 died of air pollution and 480,000 from household pollution related to the use of solid fuels like wood in cooking.

Still, public pressure has yet to build up on the issue.

"Air pollution is a serious health threat in South Asia, including India, which has never been seen or tackled with the seriousness it deserves looking at its impact on human health, society and economy,'' said Mr Sunil Dahiya, a clean air campaigner with Greenpeace.

Pollution is still seen as an urban phenomenon in the country of 1.25 billion people, most of whom still live in rural areas. India's urban population, according to the 2011 census, was 37.8 per cent.

"Pollution may not be prominent as an election issue for the following reasons. First, it seems to be a local rather than a national issue, with local factors causing it. The other issue could be that pollution seems to be a bigger problem in large cities,'' said Mr Amit Bhandari, a fellow in energy and environment studies at Gateway House, a Mumbai-based think-tank.

India is holding staggered elections in which Prime Minister Narendra Modi is seeking to retain power.

The key issues in the elections range from unemployment to defence scams to farm reforms to lift an ailing agricultural sector.

In a country that struggles with poverty and a lack of jobs, pollution is seen as a low priority by many voters.

"It can't be a major reason for elections,'' said Ms Juhi Garg, a chartered accountant whose daughter suffers from asthma, made worse by pollution. "People are more bothered about food and cleanliness, the economy per se, and jobs. Those should be the priorities right now.''

Mr Nikhil Pahwa, a resident of Delhi who does not venture out when pollution levels go up, agreed, saying: "Pollution is not going to be an issue or a significant part of my vote.''

The founder of MediaNama, a website specialising in digital and telecommunications news, added: "To my mind, there are bigger national issues to consider, including religious fundamentalism, lack of jobs... and suppression of rights.''