HARARE, ZIMBABWE (WASHINGTON POST) - The military takeover of Zimbabwe, which many expect will lead to the ouster of the world’s oldest leader, grew more puzzling on Friday (Nov 17), as President Robert Mugabe presided over a university graduation.

The appearance suggested that Mr Mugabe was no longer under military detention, and raised questions about whether the generals who staged a coup on Tuesday night were backing away from a process that would lead to Mr Mugabe’s dismissal.

On Friday morning, the military released a statement saying that “significant progress” has been made in its efforts to apprehend members of President Robert Mugabe’s government.

But negotiations with Mr Mugabe were still ongoing, it added, referring obliquely to “the way forward” without explaining if commanders were seeking Mr Mugabe’s ouster or a different kind of negotiated settlement.

“You will be advised of the outcome as soon as is possible,” it said. The statement still referred to Mr Mugabe as President and commander-in-chief.

Even some of the people purged from Mr Mugabe’s party began voicing their opposition to what appears to be a coup.

“He’s still the President of the country and therefore my President,” said Mr Didymus Mutasa, Zimbabwe’s former security chief and presidential affairs minister who was fired by Mr Mugabe in 2014. “Doing anything else would be unconstitutional.” But a wide range of groups, from civil society organisations to war veterans, continued their demands for Mr Mugabe to step down.

At the university graduation, Mr Mugabe did not speak, but sang the national anthem and handed caps to the top graduates. He wore a blue gown with a yellow corsage, looking non-plussed.

On Thursday, Mr Mugabe, 93, entered into talks with both the military commanders who placed him under house arrest and with officials from neighbouring South Africa.

In a photo released by the government newspaper, he was smiling with his arm around the army commander responsible for the military takeover, appearing untroubled.

For the 37 years he has ruled Zimbabwe – from independence to the verge of economic collapse – Mr Mugabe has outwitted his opponents at every turn, using intimidation, electoral manipulation and purges of his own party.

After initially thinking Mr Mugabe’s ouster was a done deal when soldiers filled the streets and a general appeared on television, many in Zimbabwe are now wondering if “the old man” will survive this one was well. 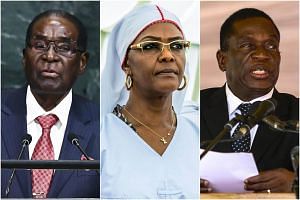 Mr Mugabe has become deeply unpopular at home because of his repressive tactics and the country’s steep economic decline during his rule. Abroad, he has been criticised for his authoritarian rule and his seizure of farms owned by the white minority. He has regularly denounced the West for many of his nation’s ills.

And yet the military’s role in detaining Mr Mugabe has become a flash point for a region that has attempted to enshrine democratic values in its charter.

Zimbabwean military leaders were aware of the sensitivities; after troops detained Mr Mugabe and took over the state television station, a top general said early on Wednesday that it was “not a military takeover".

The military leaders were prompted to act after former vice-president and one-time defence minister Emmerson Mnangagwa was fired last this month, paving the way for Mr Mugabe’s wife, Grace, to succeed him as president.

At least publicly, the military has said it won’t push Mr Mugabe to leave – even though it effectively took control of the government.

While some countries in southern Africa have evident democratic shortcomings, there have been few coups in recent decades. Many are still led by the parties that fought for independence from colonial rule.

The Southern Africa Development Cooperation Community (SADC), a regional body of 15 nations, met in Botswana on Thursday to discuss the situation and seemed to tilt toward Mr Mugabe and against the military takeover.

In an outline of issues discussed in the meeting, the body described the “unconstitutional removal of democratically elected governments".

The African Union also has taken a hard line against unconstitutional changes of government. Its bylaws require it to impose sanctions against countries that have undergone a coup and bar them from participating in the organisation’s activities.

Egypt was suspended from the African Union for a year after the military overthrew the elected government of President Mohamed Morsi in 2013. Egypt’s generals at the time also refused to describe their actions as a coup.

Many of those close to the military are hoping that Mr Mnangagwa would become the head of a transitional government if Mr Mugabe resigns. That possibility is worrying for many Western observers, who consider Mr Mnangagwa to be corrupt and abusive.

He was sanctioned by the United States in 2003 as one of several officials “who undermine democratic processes and institutions in Zimbabwe".

On Thursday, 115 civil society groups called on Mr Mugabe to step down, and a range of opposition leaders, including Mr Morgan Tsvangirai, once considered his main political rival, said it was time for Mr Mugabe to go.

Mr Mugabe has ruled since the country became independent in 1980. In his early days, he was regarded as a hero by many both at home and abroad.

But his support crumbled over the past two decades as the country’s economy withered and the government was plagued by corruption scandals.