In their first report, a team of UN-mandated investigators yesterday said they had "reasonable grounds to believe the parties to the armed conflict in Yemen have committed a substantial number of violations of international humanitarian law".

Many of these violations may amount to "war crimes" the report said, adding that the investigators had identified a number of alleged perpetrators.

The devastating conflict in Yemen has left nearly 10,000 people dead since March 2015, when a Saudi-led coalition intervened to fight Houthi rebels closing in on the last bastion of President Abdrabbuh Mansour Hadi's government.

The conflict in what was already one of the world's poorest countries has caused what the United Nations has described as the world's worst humanitarian crisis.

The Group of Independent Eminent International and Regional Experts, which was created by the UN Human Rights Council last September, detailed a long line of abuses committed by all parties to the conflict. "There is little evidence of any attempt by parties to the conflict to minimise civilian casualties," said the group's chairman Kamel Jendoubi in a statement.

The report said Houthi rebels and their allies loyal to the former president Ali Abdullah Saleh are also accused of impeding the delivery of aid and other important goods.

It concluded that "coalition air strikes have caused most of the documented civilian casualties", pointing to a large number of strikes on residential areas, markets, funerals, weddings, detention facilities, civilian boats and medical facilities.

"The specific cases investigated by the Group of Experts raise serious concerns about the targeting process applied by the coalition," the report said, pointing out that in many cases there were no military targets in the vicinity of the attacks. 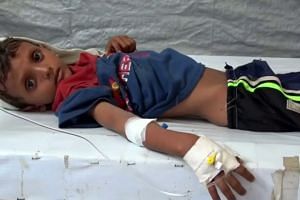 Who's who in Yemen conflict

The report covers the period from September 2014 through June this year, and does not address the latest series of deadly strikes that have killed dozens of children.

The experts said they had "received substantial information indicating that the government of Yemen, the coalition-backed forces and the Houthi-Saleh forces have conscripted or enlisted children... and used them to participate actively in hostilities".

The report also decried the devastating impact a blockade imposed by the Saudi coalition on Yemen's ports and the Sanaa airport had had on the civilian population.

The experts did not delve into the web of countries supporting different parties to Yemen's conflict, including the US, Britain and Iran, but called on all nations to stop selling arms that could be used in the war.

The Saudi-led military coalition has referred the UN report to its legal team for review, a spokesman said according to Reuters.

UN-backed talks between Yemen's government and the Houthis are to open in Geneva on Sept 6 - a first step towards resuming peace negotiations that broke down two years ago.