JOHANNESBURG (REUTERS) - South Africa's new president, Cyril Ramaphosa, is expected to give more details about how he plans to tackle corruption and boost economic growth on Friday (Feb 16), when he delivers his first state of the nation address.

Ramaphosa was sworn in as head of state on Thursday after his scandal-plagued predecessor, Jacob Zuma, reluctantly resigned on orders of the ruling African National Congress (ANC).

His election as president, which was unopposed in the parliament, has prompted a wave of optimism among South Africans hungry for change after nine years of economic stagnation and corruption scandals under Zuma. Zuma denies all wrongdoing.

"It's all systems go. We are expecting our political programme to be delivered by the new president," parliamentary speaker Baleka Mbete told state broadcaster SABC from Cape Town, where the state of the nation address will be made from around 1700 GMT.

Ramaphosa, who will see out the remainder of Zuma's presidential term until elections next year, faces an uphill battle to win public and investor support.

Africa's most developed economy needs faster economic growth if it is to reduce high unemployment - currently at 27 per cent - and alleviate widespread poverty that has persisted since the end of white minority rule in 1994.

The economy slipped into recession last year for the first time since 2009 and has also declined in indices that measure corruption and the ease of doing business. 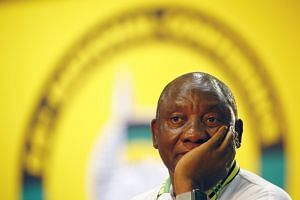 How Ramaphosa pulled the strings and toppled a president

Financial markets have rallied since Ramaphosa took over from Zuma as ANC leader in December, as investors warmed to his pledges to straighten out the country's struggling state-owned enterprises and woo overseas investment.

Ramaphosa, a former union leader who played an important role in talks to end apartheid, is expected to announce major cabinet changes in the coming days to replace Zuma acolytes in key portfolios who have been accused of mismanagement and implicated in corruption.

Ordinary South Africans are hopeful that he will deliver on promises to create more jobs.