PRETORIA (AFP) - The South African glamour model who accuses Zimbabwe's first lady of battering her with an electrical plug launched a legal bid on Tuesday (Sept 19) to have Grace Mugabe stripped of her immunity.

Gabriella Engels and her lawyers sought to persuade the North Gauteng High Court to allow them to proceed with their effort to have Mugabe's diplomatic immunity lifted.

Engels, 20, claims that Mugabe beat her repeatedly with an electrical cord in a Johannesburg hotel on Aug 13.

A public spat followed in which Engels and critics of President Robert Mugabe sought to have Grace arrested, charged and brought to court.

The legal effort to have Mugabe's immunity lifted was opposed by Zimbabwe's embassy which argued that it is not obliged to help Engels' team locate Grace, a necessary first step in challenging her immunity.

"We know it is going to be a big fight but we are ready for the fight and we do believe justice will prevail in this case," said Gabriella Engels' mother Debbie.

"She is better. She is trying to pick up the pieces of her life and carry on with her life."

AfriForum, a lobby group that typically supports white workers in South Africa, said that Mugabe was not in the country on official business and so did not meet the conditions for immunity.

"Grace Mugabe was in South Africa for private business, she was here for medical attention. During this private visit she committed a crime," said AfriForum lawyer Willie Spies.

"That is defined in international law as a grave crime (assault with the intention to cause grievous body harm).

"It is a serious crime. That is not the kind of crime you could qualify for immunity." 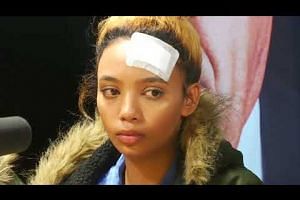 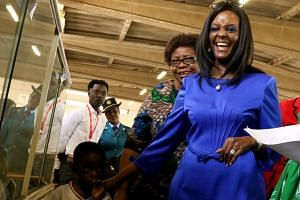 Lawyers for Zimbabwe's embassy in South Africa argued on a technicality that Engels' team had not followed the law in bringing their bid.

"If we allow this application, we make a precedent. You cannot serve papers on a spouse at her husband's work address," said lawyer Simba Chitango.

"It does not make grammatical sense or even legal sense to say Grace Mugabe lives at the presidency."

AfriForum accused the Zimbabwean side of trying to delay proceedings.

After three hours of hearings, the court reserved judgement. The case continues and could take many months to conclude.

Mugabe has alleged in the media that Engels in fact assaulted her and was "drunk" and armed with a "knife" during the incident.

Grace Mugabe is one of the frontrunners to replace her 93-year-old husband although a string of recent gaffes have hurt her credibility at home and abroad.

South Africa's main opposition Democratic Alliance party has also sought to oppose Mugabe's immunity, appealing to the Constitutional Court to have it overturned.

Despite an International Criminal Court war crimes arrest warrant, Sudanese President Omar Bashir was effectively given immunity and allowed to attend a meeting of the African Union in Johannesburg in 2015.