The Paralympian star was allowed out of prison in the capital Pretoria a day early in an apparent attempt to avoid media coverage of his release.

The manner of his release prompted an angry response from sources close to Steenkamp's family, according to NBC TV in the United States. " It is insane what officials have done here tonight," it reported the unnamed source saying. 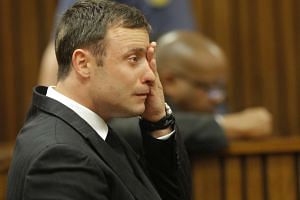 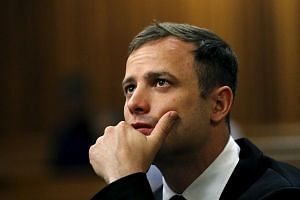 Timeline in Oscar Pistorius case: From Olympic fame to jail to release

"The handling of the actual placement is an operational matter of the local management, and how they handle it is their prerogative that is carried out in the best interest of all parties concerned."

South Africa's "Blade Runner", was originally scheduled to be released on parole on Tuesday, a day short of a year into his five-year sentence.

But the disgraced Paralympic gold medallist must not only serve the rest of his sentence under house arrest, but must face an appeal by prosecutors who argue that he should have been convicted of murder rather than culpable homicide.

Pistorius, 28, who was found guilty of the lesser charge when he fired four shots through a locked bathroom door and hit Steenkamp, will be confined to his uncle Arnold's home in a wealthy suburb of the capital Pretoria.

The athlete, whose lower legs were amputated when he was a baby, will be freed in line with South African sentencing guidelines that say non-dangerous prisoners should spend only one-sixth of a custodial sentence behind bars.

The department of correctional services said Pistorius' parole conditions include that the gun enthusiast must undergo psychotherapy and is not allowed to possess a gun.

Africa's most advanced economy has one of the world's highest rates of violent crime. "He might not have been found guilty of murder, but it was yet another instance of a South African woman killed by an intimate partner, and I don't believe the time he spent in prison reflects the severity either of his crime or the epidemic of violence against women," said Louise Ferreira, a feminist.

Steenkamp's family have said they are unhappy with Pistorius's sentence and questioned the verdict in public in August.

Tania Koen, a lawyer for the Steenkamp family which has opposed early parole, told state broadcaster SABC last week: "Nothing is changed in their lives. Reeva is not coming back."

Prosecutors argue the verdict should be one of murder because Pistorius must have known that the person behind the door could be killed. The appeal is due to be heard on Nov. 3.

The state will argue that the trial judge misinterpreted parts of the law and ignored vital evidence. A murder conviction would result in a minimum sentence of 15 years in prison.

A panel of five judges will hear the appeal. They could either reject the prosecution's appeal, order a retrial or convict Pistorius of murder themselves, legal experts say.