Mnangagwa was the leading contender to succeed Mugabe, 93, but his abrupt removal appeared to clear the way for the president's wife Grace to take over.

The government-owned Chronicle newspaper published an excoriating editorial accusing Mnangagwa and his supporters of being "prepared to stampede President Mugabe from power".

"The President had warned his deputy time and again to desist from having grand designs to seize power unconstitutionally," the Bulawayo-based paper said.

It accused Mnangagwa of "running parallel structures with the ruling ZANU-PF party and fomenting divisions."

Mnangagwa, 75, a veteran party loyalist who has strong ties to the military and to veterans of Zimbabwe's independence war, has not yet commented on his dismissal.

"(Mugabe) has done it to pave way for his wife. It's not a secret anymore," Victor Matemadanda, secretary-general of the war veterans association, told AFP. 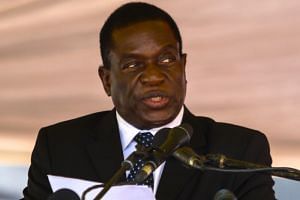 "Mnangagwa himself knew this was coming.

"Should he venture into anything else in service of the people of Zimbabwe, he is going to have the support of war veterans."

GRACE ON THE RISE

On Saturday, Grace Mugabe was jeered at a rally in Bulawayo in front of the president.

She shouted back at the hecklers: "If you have been paid to boo me, boo, go ahead... I don't care, I am powerful."

The Chronicle said the jeering was "the highest level of indiscipline ever seen in the ZANU-PF" and that Grace had been targeted for exposing the "nefarious activities" of Mnangagwa's supporters.

Mugabe, the world's oldest head of state, has ruled Zimbabwe since independence from Britain in 1980 and is due to stand in elections again next year.

He sacked Mnangagwa for "disloyalty, disrespect, deceitfulness and unreliability", a presidential spokesman said on Monday.

Grace Mugabe - 41 years younger than her husband - has three children with the president and is often accused of extravagant spending on clothes and travel, as well as involvement in corrupt land deals.

In her political ambitions, she is thought to be backed by "G-40", a group of young activists of the under-40 generation that has earned a reputation for aggression.

Grace was granted diplomatic immunity in South Africa in August after she allegedly assaulted a model at an expensive Johannesburg hotel where the couple's two sons were staying.