MAPUTO (AFP) - Mozambican aviation authorities on Wednesday told how an American man handed in the suspected piece of washed-up airplane debris that may be from missing flight MH370.

Joao de Abreu, president of Mozambique's Civil Aviation Institute (IACM), told AFP that no positive identification of the piece had been made.

"We received this afternoon a piece of plane that was brought by an American visitor named Blaine Gibson," de Abreu said. "He said he had been walking on the beach two days ago and found the piece near Vilankulo, on a sand bank called Paluma near Benguerra Island (part of the Bazaruto archipelago)."

Gibson is reported to be an American blogger and investigator who has been looking for the missing plane's remains.

"The piece is 57cm by 90cm. It is asymmetrical, of composite material, and its colour is grey," de Abreu said.

"The piece is still with us and we are following the legal channels to have experts analyse it.

"It's still premature and speculative to say that this piece belongs to a Boeing or an Airbus or another plane.

"We will solicit help to have experts analyse it in the proper manner." 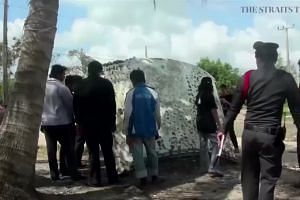 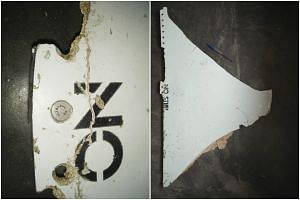 Australia to conduct tests on aircraft debris found in Mozambique

De Abreu said Gibson arrived at the department in the Mozambican capital Maputo accompanied by a representative from the Australian consulate.

He added there were no written marks that identified the piece as belonging to MH370.

About 14km from the mainland, Benguerra Island is a popular tourist destination.

Earlier on Wednesday, Malaysia's transport minister said there was a "high possibility" the piece belonged to a Boeing 777, the same make as missing flight MH370.

US television network NBC also cited US, Malaysian and Australian investigators who had seen photos of the object, which the network said could be a horizontal stabiliser from a Boeing 777.

The find comes just days before the March 8 two-year anniversary of the plane's mysterious 2014 disappearance.

The aircraft diverted for unknown reasons while on a routine overnight flight from Kuala Lumpur to Beijing with 239 passengers and crew aboard.

Investigators believe the plane rerouted to the southern Indian Ocean, where it crashed.

No crash site has been found.

Last July, a man on the French-held Indian Ocean island of Reunion found a wing fragment that experts later determined came from MH370, the only confirmed evidence of the plane's fate to be found.