KHARTOUM (AFP) - Sudanese officials on Tuesday (Aug 18) issued contradictory comments on whether the country was in contact with Israel with a view to normalising relations between the two nations.

When asked by AFP on Tuesday if there had been direct contact between Sudan and Israel, or whether Khartoum had taken steps to normalise ties with the Jewish state or sign a peace deal, foreign ministry spokesman Haider Badawi responded, "I cannot deny it."

Badawi also told Sky News Arabia television on Tuesday that "there is no reason for the continuation of hostilities between Sudan and Israel".

But foreign minister Omar Gamaledinne later said "the question of relations with the Israelis has never been discussed by the Sudanese government."

"The declaration made by Sudan's foreign ministry spokesman Haider Badawi has astonished us because he is not mandated to comment on this subject," Gamaledinne added in a statement.

Last week, Israel and the United Arab Emirates agreed to normalise relations, a historic shift making the Gulf state only the third Arab country to agree to establish full diplomatic ties with the Jewish state.

The Israeli press had said Bahrain or Oman but also Sudan could be next.

Badawi told AFP the UAE's decision was "a courageous step on the right track towards peace in the Middle East and the world".

"Peace between Israelis and Arabs will favour world peace," he added.

In an apparent reaction to Badawi's comments, Israel's Prime Minister Benjamin Netanyahu said late on Tuesday that his country and Sudan "will be able - together - to build a better future for all peoples of the region." 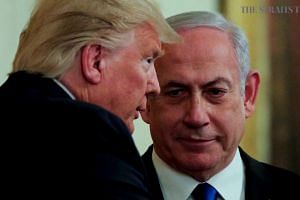 Saudi silent over Israel-UAE deal but covert ties under focus

Shifting dynamics of the Mideast pushed Israel and UAE together

"We will do whatever is necessary to turn vision into reality," the Israeli premier added.

General Abdel Fattah al-Burhan, who heads Sudan's transitional sovereign council, met with Netanyahu in February for talks that appeared to signal an end to Khartoum's long-standing boycott of the Jewish state.

Soon after their meeting, held in Uganda, Netanyahu announced that the two leaders had agreed to cooperate towards normalising ties.

Sudan's cabinet later denied that Burhan had made promises of normalisation.