NAIROBI, KENYA (NYTIMES) - A half a world away from the spectacle of Washington, Mrs Melania Trump still managed to create one of her own during a Kenyan safari on Friday (Oct 5), riding out into the grassland wearing a crisp white pith helmet - a common symbol of European colonial rule.

It may not have been the most glaring faux pas the hyper-scrutinised Mrs Trump has ever made.

That title probably goes to the "I really don't care. Do U?" jacket she wore on the way to visit detained migrant children in Texas in June.

But to some - especially those who study African history - her fashion choice in Kenya was still a big error on the global stage: The sight of a First Lady wearing something so closely associated with the exploitation of Africans.

Hours before Washington woke up, critics were pointing out how Mrs Trump - who is here representing a husband widely reported to have disparaged African nations in vulgar terms - had fumbled this segment of her visit.

Mrs Trump is in Africa on a four-nation tour, with plans to visit Egypt this weekend after stops in Ghana, Malawi and Kenya.

The criticism was not universal. Several large Kenyan news sites focused not on the safari fashion but on Mrs Trump's other attention-grabbing activity of the day: Feeding baby elephants, and a fall broken by a Secret Service agent.

But on social media, the angry tweets and hashtags about the helmet rolled in: #FLOTUSinAfricaBingo documented what some felt were Mrs Trump's tone-deaf fashion choices.

Dr Kim Yi Dionne, a political science professor who specialises in African politics at the University of California, Riverside - and a creator of the hashtag - said what looked like a quibble over aesthetics was actually a more substantive criticism of the First Lady's understanding of Africa.

"When people think of Africa, they have these standard narratives," Dr Dionne said. "Her attire is a signal of her understanding of what Africa is in 2018. It's tired and it's old and it's inaccurate."

When reached for comment about the criticism on Friday, the East Wing did not immediately respond.

While in Africa, Mrs Trump has gone into almost no specifics about her visit, except to say that she has hoped to learn more about life in Africa and to promote her child-focused "Be Best" platform.

She is contributing to the Trump administration's mixed signalling, participating in a ceremonial donation of more than one million textbooks in Malawi, one of the world's poorest countries, on Thursday, even as President Donald Trump has suggested deep cuts to foreign aid funding that could supply future donations.

In each country on her visit, Mrs Trump has seemed at ease, and perhaps happy to be out of Washington.

She has posed for photos with babies and children, often murmuring the same things at each stop - "Beautiful!" and "Hi, guys!" - while holding their hands or waving at the cameras.

And with Washington imploding over a battle to confirm Judge Brett Kavanaugh, the President's nominee for the Supreme Court, Mrs Trump seemed free of the usual scrutiny that nips at her stilettos in Washington.

On Friday, she looked happy as she visited a red clay feeding pen for orphaned elephants at the Nairobi National Park.

She administered them formula in oversized baby bottles, patted the animals on their heads and inspected their floppy ears. 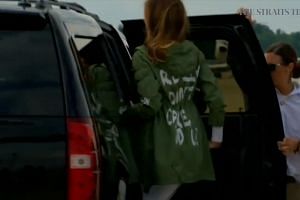 US firm rips into Melania's jacket

Mrs Trump, a former model who is poised and hypersensitive to the criticism she receives for putting one toe out of place, wore a pristine white shirt to see the elephants. She emerged without a smudge.

After the elephant feeding, she added the pith helmet to her outfit, and social media began to light up.

As the First Lady sat alone in her vehicle, peering through binoculars and shooting photos of zebras, giraffes and impalas on her iPhone, critics were parsing her decision to wear the attention-grabbing white hat.

"It's like showing up to a meeting of African-American cotton farmers in a Confederate uniform," Professor Matthew Carotenuto, a coordinator of African Studies at St Lawrence University, wrote on Twitter. "Historical context matters."

Beyond hosting First Ladies at the White House or meeting them at the United Nations, it is unclear how much Mrs Trump knew about Africa before she decided to visit.

Throughout her trip, observers have been trying to read the reasons behind her journey, searching for clues that might place her in studied opposition to her husband's harshly levelled stereotypes about African nations.

But Mrs Trump's seemingly small decision to wear the helmet appeared to show a similarly limited understanding of the places she's been this week, argued Dr Dionne, the political science professor.

In other ways, Mrs Trump has seemed independent. She came here without Mr Donald Trump and has managed to avoid some of the more uncomfortable situations that previous visitors have faced: President George W. Bush encountered elephants mating when he embarked on a safari in Botswana in 2018. (The Kenyan elephants seemed solely interested in their bottles.)

An hour into her safari ride, Mrs Trump adjusted her outfit and climbed out of a vehicle to visit an ivory burn site, where the material has been destroyed to discourage the ivory trade.

She bent down and scooped up some of the burned ivory, rubbing it lightly in her hands, finding herself once again at odds with her husband as the cameras caught her every movement.

His administration has moved to lift a ban on some elephant trophy imports.

"It is sad to see this," the First Lady said to her guide, her hands covered in ash.