SIDI BOUZID, TUNISIA (AFP) - As Tunisia prepares for presidential elections, young people in the city that was the cradle of the Arab Spring are disenchanted, saying the dreams of the revolution have been "dashed".

"As long as we don't have a real leader that loves their country, we will not vote!" said Issam Heni, 34, determined to boycott the polls set for Sept 15.

The election was brought forward from November after the death in July of Beji Caid Essebsi, Tunisia's first president democratically elected in nationwide polls after the fall of longtime dictator Zine El Abidine Ben Ali.

It was in the central Tunisian city of Sidi Bouzid that a young street vendor, Mohamed Bouazizi, set himself alight in December 2010 in protest over unemployment and police harassment.

His action sparked demonstrations that swept across the Arab world.

Tunisia has since been praised as a rare success story for democratic transition after the uprisings.

Yet while the first post-revolution elections in 2011 saw unprecedented participation, years later many residents, including those who were adolescents in 2011, are disillusioned. 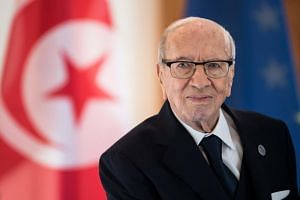 In first for Tunisia, police and soldiers head to polls

The interior of the country, traditionally less well off than the coast, remains isolated, fuelling regular outbreaks of social unrest.

While Mr Heni voted in national polls in 2011 and in 2014, as well as the 2018 municipal elections, this time around he is more apathetic.

"The elections have become one of many events that don't concern me," he said, sitting in a cafe full of idle young people.

"They want power and only power. Nothing more, nothing less," added Nadhmi, who is unemployed and in his 30s.

He said he is often overwhelmed by financial difficulties.

"The dreams of the revolution and hopes of improving living conditions for Tunisians were dashed by mismanagement by a mafia political class," he said.

"When we have a candidate like the Turkish president, we will vote without fail," said Zied, 29, who has a degree in English and has been unemployed for five years.

In 2014, Sidi Bouzid residents came out to support one of their own, conservative businessman Hechmi Hamdi, in the first round of the presidential election.

Mr Hamdi is running again, but this time with little traction.

For some, the strongman they are looking for is embodied by controversial media mogul Nabil Karoui, a popular candidate now in prison on charges of money laundering.

"I don't care if he is a thief or a bandit, the bottom line is that he is the only one working to help people like me," said Abir, 19, bent pulling onions in a vast field along the road to Sidi Bouzid.

For Abir, the 56-year-old who built a reputation publicising his charity campaigns "could save the poor in this country".

But some of the dozen other women working with Abir under the blazing sun disagree.

"These elections are trivial. Nothing but the work we do with our own hands, now and like always, puts food on the table. No one will concern themselves with us," a woman called Fatma said.

The president "does nothing but make the rich richer and the poor poorer". Nabil Jalleli, coordinator of the regional office of the Independent Higher Authority for Elections poll body in Sidi Bouzid, understands the strong temptation to abstain "especially on the part of the youth".

Abstentions reached 65 per cent for the 2018 municipal elections.

Despite its democratic progress, Tunisia is struggling to meet the expectations of its population.

Public services are inadequate and prospects limited for many young people, leading some to try to reach Europe to find a better future.

But Haythem, a laundry worker in his 30s, refused to give in to defeatism.

"We must vote so our country recovers", he said.