KINSHASA/GENEVA (REUTERS) - The World Health Organisation (WHO) will convene an Emergency Committee on Friday (May 18) to consider the international risks of an Ebola outbreak in the Democratic Republic of Congo, WHO spokesman Christian Lindmeier said on Thursday.

The expert committee will decide whether to declare a“public health emergency of international concern”, which would trigger more international involvement, mobilising research and resources, Lindmeier said.

Congo's Ebola outbreak has entered "a new phase" after a case of the deadly virus was detected for the first time in the north-west city of Mbandaka, with a population of about 1 million people, the health minister said late on Wednesday (May 16).

So far, the 23 deaths believed to have been caused by Congo's latest Ebola outbreak had been detected in more isolated areas, giving authorities a better chance of ring-fencing the virus.

The first urban case to be announced threatens to change that. The WHO, which on Wednesday deployed the first experimental vaccines in the vast central African country, had expressed concern about the disease reaching Mbandaka, which would make the outbreak far harder to tackle.

Adding to concerns is the city's location on the banks of the Congo River, a major thoroughfare for trade and transport into the capital, Kinshasa. The Congo Republic is on the other side of the river.

"We are entering a new phase of the Ebola outbreak that is now affecting three health zones, including an urban health zone," Health Minister Oly Ilunga Kalenga said in a statement."Since the announcement of the alert in Mbandaka, our epidemiologists are working in the field to identify people who have been in contact with suspected cases."

He said authorities would intensify population tracing at all air, river and road routes out of the city. 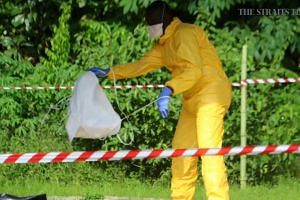 It is the ninth time Ebola has been recorded in Congo since the disease made its first known appearance near its northern Ebola river in the 1970s.

Ebola is most feared for the internal and external bleeding it can cause in victims owing to damage done to blood vessels.

Before Wednesday's announcement, there had been only two cases of the virus confirmed by lab tests.

The first batch of over 4,000 Ebola vaccines was sent by the WHO to Kinshasa on Wednesday. The Health Ministry said vaccinations would start by early next week, the first time the vaccine would come into use since it was developed two years ago.

The vaccine, developed by Merck and Co Inc, is still not licenced but proved effective during limited trials in West Africa in the biggest-ever outbreak of Ebola, which killed 11,300 people in Guinea, Liberia and Sierra Leone from 2014 to 2016.

Before the latest confirmed case, Peter Salama, the WHO's deputy director-general for emergency preparedness and response, said the current number of suspected, probable or confirmed cases stood at 42, with 23 deaths attributed to the outbreak. He said another 4,000-vaccine batch was expected soon.

Health workers have recorded confirmed, probable and suspected cases of Ebola in three health zones of Congo's Equateur province, and have identified 432 people who may have had contact with the disease, the WHO said.

Supplies sent to Congo included more than 300 body bags for safe burials in affected communities. The vaccine will be reserved for people suspected of coming into contact with the disease, as well as health workers.

The vaccine requires storage at a temperature between -60 and -80 degrees C, tricky in a country with unreliable electricity.

"We are now tracing more than 4,000 contacts of patients and they have spread out all over the region of northwest Congo, so they have to be followed up and the only way to reach them is motorcycles," Salama said.