JOHANNESBURG (REUTERS) - A group of 33 lions rescued from circuses in Peru and Columbia arrived by plane in Johannesburg on Saturday to begin a new life in the African bush.

The final destination for the animals, which were flown in on a chartered cargo flight, will be the Emoya Big Cat Sanctuary, a 5,000 hectare reserve on a private estate in South Africa's northern Limpopo province.

Cleared by a state vet, the cats grunted and roared as the crates containing them were loaded onto trucks for the last leg of their journey by road several hours north of Johannesburg. "Everyone travelled pretty well. They only had airline food and they are looking forward to a good meal now," said Jan Creamer, president of Animal Defenders International (ADI), which organised the rescues and the airlift operation.

ADI said 24 of the cats had been taken from circuses in Peru, part of a menagerie of over 100 animals rescued with the help of Peruvian officials cracking down on illegal wildlife trafficking.

Bears, monkeys and other wildlife scooped up in the operations in Peru have been transferred to sanctuaries in the South American country and a tiger has been flown to Florida. The nine lions from Columbia were voluntarily surrendered from a circus. 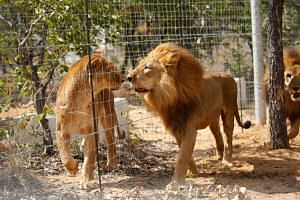 ADI said both countries have banned the use of wild animals in circuses.

The lions would not survive in the African wild as many have been declawed or have had teeth smashed or removed, one is almost blind and another is missing an eye.

"At their new home at Emoya Big Cat Sanctuary, the lions will enjoy large natural enclosures situated in pristine African bush, complete with drinking pools, platforms and toys," ADI said in a statement.

"The lion habitats will be steadily expanded over the coming months as the lions become familiar with their new life and are introduced to each other," it said.