OUAGADOUGOU (REUTERS) - Burkina Faso President Roch Kabore called on the public on Saturday (March 3) to collaborate more closely with the armed forces, the day after attacks at army headquarters and the French embassy left 16 people dead, including eight gunmen, and wounded 80.

No one has claimed responsibility for Friday's attacks in the capital Ouagadougou, which follow two other major assaults in the past two years.

Previous attacks in Ouagadougou and near the porous border with Mali were conducted by allies of Al-Qaeda in reprisal for Burkina Faso's participation in a regional fight against Islamist militants.

"In these difficult moments, I would like to reaffirm to Africa and the entire world my unshakeable faith in the capacity of the Burkinabe people to preserve their dignity and ferociously oppose their enemies," Kabore said in a speech on national television.

"I would like to encourage the population to reinforce collaboration with our defence and security forces in our common fight against terrorism," he said.

Burkinabe security forces are frequently targeted by militants near the country's borders with Mali and Niger, where they participate in a regional task force aimed at countering rising jihadi violence.

Authorities said four gunmen were killed at army headquarters, where the assailants also detonated a car bomb, and four more were killed at the embassy. Two attackers were also captured on Friday.

Local residents were left to wonder how their country remained vulnerable to such attacks after a raid in January 2016 claimed by Al-Qaeda in the Islamic Maghreb (AQIM) and another last August by suspected Islamic militants killed a total of nearly 50 people.

"If the army headquarters is totally wiped out there is a problem," said Souleymane Traore, director of the newspaper Le Quotidien.

"We are really revolted by this insecurity and we must point the finger at those who are responsible." 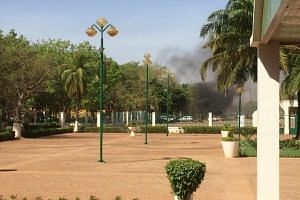 Security was reinforced near strategic sites in Ouagadougou on Saturday as Prime Minister Paul Kaba Thieba, flanked by ministers from his government, toured the army headquarters and the French embassy.

Government spokesman Remi Dandjinou told Reuters on Saturday that arrests had been made in connection with the attacks but it was unclear if he was referring to new arrests or the two that authorities had reported on Friday.