JOHANNESBURG • Leaders of the Brics bloc of emerging economies, meeting in the wake of tariff threats by US President Donald Trump, yesterday signed a declaration supporting an open and inclusive multilateral trading system under World Trade Organisation (WTO) rules.

Brazil, Russia, India, China and South Africa agreed at their three-day summit in South Africa to fight unilateralism and protectionism.

"We reaffirm the centrality of the rules-based, transparent, non-discriminatory, open and inclusive multilateral trading system, as embodied in the World Trade Organisation, that promotes a predictable trade environment and the centrality of the WTO," the declaration signed by the five leaders said.

"We recognise that the multilateral trading system is facing unprecedented challenges. We underscore the importance of an open world economy," said the leaders.

They also called on all WTO members to abide by WTO rules.

The meeting of Brics leaders is the first since the US administration launched a push to rebalance trade multilateralism that Mr Trump has deemed unfair - relationships that the United States once championed.

Earlier yesterday, Chinese President Xi Jinping called for a concerted effort by global institutions such as the United Nations and the WTO to fight unilateralism and protectionism.

Mr Xi, who leads the world's second-biggest economy, also called for dialogue to settle disputes on global trade, underlining remarks he made at the opening of the summit the previous day. "We must work together... to safeguard the rule-based multilateral trading regime, promote trade and investment, globalisation and facilitation, and reject protectionism outright," he said.

Speaking at the opening of the summit on Wednesday, Mr Xi said there would be no winner in a global trade war.

Russian President Vladimir Putin, who held a controversial meeting with Mr Trump last week, echoed the calls for closer ties among Brics members and for stronger trade within the group.

"Brics has a unique place in the global economy - this is the largest market in the world, the joint GDP (gross domestic product) is 42 per cent of the global GDP and it keeps growing," Mr Putin said.

"In 2017, the trade with our Brics countries had grown 30 per cent, and we are aiming at further developing this kind of partnership." 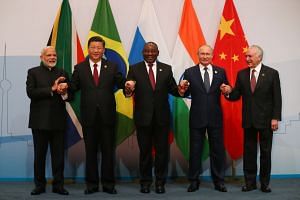 China rallies Brics nations to stand up to Trump

The Brics group, comprising more than 40 per cent of the global population, represents some of the biggest emerging economies, but it has struggled to find a unified voice.

Analysts say US trade policy could give the group renewed purpose. "Trade agreements between associations of countries like Brics have become increasingly important," said Mr Kenneth Creamer, an economist at Johannesburg's Wits University. "South Africa, and Africa more broadly, can benefit from increasing exports to fast-growing countries like India and China. Brics has the strategic potential to reshape world trade."

A handful of protesters gathered near the conference hall where the summit was being held. Their leader, activist Trevor Ngwane, said "none of these heads of state speaks for the working class or the poor".

He handed a list of complaints to South African Public Works Minister Thilas Nxesi, who said the Brics forum would help attract investment and create jobs.