NAIROBI (REUTERS) - A blast near a cinema in the centre of Kenya's capital injured two people on Saturday (Jan 26) and police said they suspected it was a homemade bomb.

That attack was claimed by Al-Shabaab, a Somali militant group behind a series of attacks in Kenya in recent years.

A man of Somali appearance had hired a porter to push some luggage at about 7pm (modnight on Sunday, Singapore time) before leaving the porter at a busy junction saying he had to find his identity card, Ndolo said, adding that the luggage then exploded, injuring the porter and a nearby newspaper vendor.

A Reuters reporter at the scene said there did not appear to be any major damage to surrounding shops. 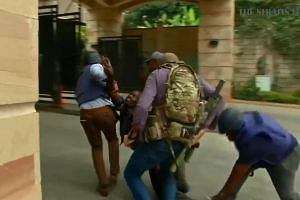 Police has set up a security cordon in the area.

"It was a very big sharp explosion that made everyone run away," said security guard Appolonary Odero, who was in the area.