The three brothers, accused by the public anti-graft watchdog of using their friendship with Zuma to influence policy and amass wealth, have denied any wrongdoing, as has Zuma.

Ajay Gupta was declared "a fugitive from justice" by South Africa's chief prosecutor this week after he failed to report to police investigating allegations that millions of dollars of public money intended for a state-backed dairy project were siphoned off.

Leigh Gunkel-Keuler, a spokeswoman for Johannesburg's main airport, said Ajay Gupta was on an Emirates flight bound for Dubai on Feb 6 at 8.30pm local time.

A spokesman for the elite Hawks police unit that targets organised crime and corruption said it had made contact with the Gupta family's lawyers but not yet located Ajay. He said police were only searching for Ajay, not his brothers Atul or Rajesh, contrary to some domestic media reports.

A lawyer who used to represent the Guptas told Reuters his mandate to work for the family had recently been suspended. Other lawyers authorised to speak for the Guptas could not immediately be located for comment.

South Africa has no extradition treaty with the United Arab Emirates (UAE), where Dubai is located and this could complicate South African authorities' efforts to question Ajay Gupta - if he remained in the Gulf state.

A spokesman for the UAE embassy in South Africa was not available for comment.

Gunkel-Keuler said the airport would hand over all relevant information to the Hawks, which are formally known as the Directorate for Priority Crime Investigation.

Earlier this week, the Hawks raided Gupta properties as part of investigations into the dairy farm in the Free State province. The farm was meant to benefit the local community but prosecutors described it as a "scheme designed to defraud and steal". 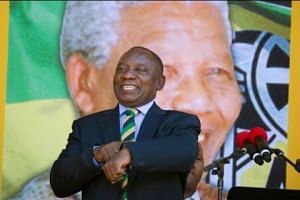 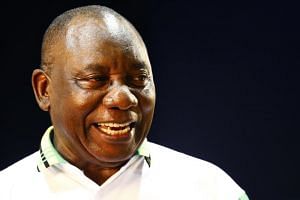 How Ramaphosa pulled the strings and toppled a president

After the raids, eight people, several of whom have worked for Gupta firms, appeared in a South African court on charges including fraud.

Among the eight were Gupta nephew Varun Gupta, who was an executive director of the Guptas' Shiva Uranium firm. Zuma's son Duduzane was also a director at Shiva Uranium.

The main opposition party, the Democratic Alliance, wants the dairy project inquiry widened to include Mining Minister Mosebenzi Zwane, an ally of Zuma who worked at the Free State's agriculture department when the farm funds were diverted.

A spokeswoman for Zwane did not answer her phone on Friday. Zwane has denied wrongdoing when asked about the project.

Relations between the Guptas and Zuma, who resigned on Wednesday after being instructed to do so by the ruling African National Congress, are the focus of a separate judicial inquiry into high-level state corruption.

A top judge will investigate whether the Guptas sought to influence the appointment of Cabinet ministers and were unlawfully awarded state tenders. Zuma's spokesman did not respond to a request for comment.

South Africa's new president, Cyril Ramaphosa, has made fighting corruption a top priority. He has said that police and prosecutors should be strengthened in the fight to root out graft.