Japan's Prime Minister Shinzo Abe endorsed apologies by his predecessors for the "immeasurable damage and suffering" his nation caused in World War II, while suggesting that future generations of Japanese should be spared the need to continue expressing regret.

"Japan has repeatedly expressed the feelings of deep remorse and heartfelt apology for its actions during the war," Mr Abe said yesterday, the eve of the 70th anniversary of the end of World War II. "Such a position articulated by the previous Cabinets will remain unshakeable into the future."

He sketched Japan's actions against a backdrop of the isolation suffered after the launch of economic blocs by Western colonialists and its attempt to break out of this through the use of force. Thus, he said, Japan became a challenger to the international economic order and, without strong political checks at home, entered war.

But the lessons learnt from its folly had been engraved in the national conscience.

"I express my profound grief and my eternal, sincere condolences," the 60-year-old premier said. 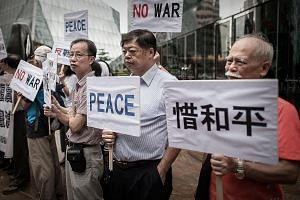 Reactions in Asia and US to Abe's WWII remarks

His much-awaited statement, which did not include a fresh apology, looked carefully tailored to walk a fine line between critics who see him as a revisionist of Japan's wartime past and his right-wing base that feels Japan has expressed enough remorse.

The statement also drew attention to Japan's post-war pacifism and its development aid to Asia.

But it will likely not be seen as adequate by many in South Korea and China, the two countries that suffered the most under Japanese occupation.

The official Xinhua news agency called Mr Abe's statement a "retrogression" from the 1995 statement by then Premier Tomiichi Murayama that admitted Japan's militarist past. A headline from South Korea's Yonhap news agency said: "Abe skips his own apology".

That aside, his address will also be examined for foreign policy intent. Japan will never again use force or the threat of force to settle disputes, Mr Abe said. He also stressed respect for the rule of law in settling disputes and vowed to work closely with countries that, like Japan, stand for "freedom, democracy and human rights".

Mr Abe, who forsook his usual dark suits for a less sombre light grey one, expressed gratitude to nations such as China and the US that had made efforts towards reconciliation after the war.

While the past had to be accepted with humility, Japan must not let its post-war and future generations "be predestined to apologise", he said, referring to his own people, 80 per cent of whom were born after World War II.

SEE TOP OF THE NEWS & HOME