The entire apartment was dark, except for a sliver of light below the bathroom door - a sight that filled Ms Marina Krim with mounting dread.

When she pushed it open, still clutching the hand of her three-year-old daughter, Nessie, after a wild dash home in search of her two other children, she found Lucia "Lulu", six, and Leo, two, drenched in blood in the bathtub, throats slit, eyes staring vacantly.

On the bathroom floor was their nanny, Yoselyn Ortega, wrists bleeding from a series of slashes as she plunged a knife into her own neck.

"It's so awful. It's like a total horror movie," Ms Krim told a silent courtroom last week through anguished sobs. "I walk down the hall and I see the light on under the back of the door, and I'm like 'Oh God, it's so quiet in here, oh God. Why is it so... quiet?' And I open the door, oh God."

On March 1, more than five years after the gruesome October 2012 killings, employer and nanny came face to face once more, in the State Supreme Court in Manhattan.

Ms Krim, 41, was the first witness to testify in the murder trial, which will put Ortega, 55, behind bars for the rest of her life if convicted.

The killings inspired a best-selling novel, half a world away in France, on the relationship between a seemingly perfect nanny and her wealthy employers, and brought into sharper focus the divide between the rich and the poor in New York City.

On the first day of the trial, emotions ran high as Ms Krim turned to address Ortega, who has pleaded not guilty by reason of insanity.

Stopping to confront her on the way to the witness stand, she stared down her former nanny, telling her: "I just need a good look at you."

And after a harrowing testimony that left jurors in tears, she snapped at Ortega: "You're disgusting!"

Ortega, a naturalised US citizen, started working for the Krims in 2010, and was warmly accepted by the family.

The three children fondly nicknamed her Josie, and just nine months before the murders, the family had paid for her trip back to the Dominican Republic. In fact, they travelled there with her, staying a few days at her sisters' home.

Ortega, said Ms Krim in court, had been punctual and reliable, "always where I needed her to be". 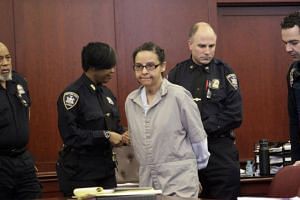 ‘You’re evil!’: Mother rages at nanny during US murder trial

A dance instructor informed Ms Krim, who had hurried over after Nessie's swimming lesson, that Ortega had not come by with Lucia and Leo.

Ms Kim fired off a series of anxious texts to her nanny, then went on to make frantic phone calls that went straight to voicemail.

Panicking, she raced back to her luxury Manhattan apartment - and into the blood-soaked bathroom.

It turned out that Ortega had taken the siblings to the park before the three headed home.

There, she selected two knives from the kitchen, and used them to stab Leo five times, and Lucia 30 times.

The cuts on their throats were so severe that first responders thought the siblings had been decapitated, said assistant district attorney Courtney Groves last Thursday in a chilling opening statement that laid bare the viciousness of the killings.

"There was no way to save them," she said. "The devastation the defendant had inflicted on their little bodies was too much."

Lucia had fought back, she said, and Leo was so wet with blood that the officer who lifted him from the tub worried about losing his grip.

Ortega, she said, waited until Ms Krim had stumbled on the scene before stabbing herself so "she could see Marina's reaction to the carnage".

Ms Krim, who traded a job as marketing director for full-time motherhood, recalled banging her head in desperation against the marble pillars of her apartment building.

Her husband, Kevin, then a CNBC executive, received the bad news at the airport, where he was met by police that night after landing home from a business trip.

The defence painted a portrait of a woman living under the weight of chronic mental illness, dogged for most of her life by hallucinations and disembodied voices.

Friends and relatives said that in the weeks leading up to the murders, Ortega seemed to be unravelling. She started seeing a psychiatrist. Her sister was jolted awake three days before the killings by Ortega tossing pots and pans around in the kitchen, and banging her head against the wall.

On the morning of the killings, she demanded to be let into her neighbour's home, muttering: "I can't be alone. I'm afraid."

Ms Krim took the stand for a second time last Friday to testify that Ortega was "not her normal self" in the months before the killing, but that there was nothing in their 21/2 years together to suggest that her nanny was mentally unstable.

The prosecution says Ortega was driven by malice, not madness.

She had plotted the murders, fuelled by resentment towards Ms Krim, whom she saw as being the mother she could never be.

She had left her son in the Dominican Republic, before taking him to New York just a few months before the killings. But Ortega - who was earning about US$500 (S$660) week - struggled to support him. She had him sent to a private school instead of a public one, where he would have to repeat a grade.

She told police in 2012 that she hurt the children because she had money problems, and was angry at their parents, who constantly changed her schedule and offered her an extra US$100 a week to clean as well - a gesture that the family said was meant to help her out financially.

The case of a New York nanny turned killer carried with it the fraught issues of income inequality and the widening class divide.

The Krims and Ms Ortega may have all lived in Manhattan, but they occupied vastly different worlds.

Ortega lived in a rundown, overcrowded apartment building, sharing a small flat with her son, sister and niece, and selling cheap make-up and jewellery to earn more cash.

The Krims' pre-war condominium, a short stroll from Central Park, came with its own doorman. They holidayed often, having met for the first time in Venice.

Mr Krim, who now heads a data analytics firm, held a string of high-flying jobs with big-name companies such as Yahoo and Bloomberg.

After moving from San Francisco to New York in 2009, the family decided to hire a nanny to shuttle the children around to an array of activities that included ballet classes, swimming lessons and second-language courses.

In 2014, the US Census declared that the gap between Manhattan's rich and poor was the country's greatest. The top 5 per cent of households e earned US$864,394 - a whopping 88 times as much as the poorest 20 per cent.

Those at the bottom "may even be losing ground", said sociologist Andrew A. Beveridge then, noting that while housing and living costs soared, public assistance for needy families has remained scarce.

The murder trial - which began after five years of delays and hearings about Ortega's mental fitness - is expected to go on for three months.