SINGAPORE (REUTERS) - Shares of Singapore-listed Noble Group jumped 7 per cent when trading opened on Monday after Asia's biggest commodity trader said it had been approached by a number of parties about potential financing and investment options and refuted rumours that it would not be able to fund a US$735 million bond redemption due this week.

The stock pared initial gains to trade up 3.3 per cent from Friday's close at 47 cents as at 9:30am.

Noble has been grappling with waning investor confidence this year after being accused by Iceberg Research in mid-February of inflating its assets by billions of dollars. 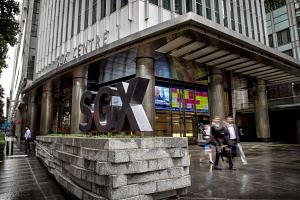 It has rejected the claims and commissioned a report by PwC to review its accounting practices in an attempt to soothe investor concerns that appeared to accelerate last week when its shares slid nearly 30 per cent. Since mid-February they are down some 60 per cent.

In Monday's statement, Noble stressed that it has ample cash and liquidity to meet its obligations and operate its business. It can fund the US$735 million bond redemption due Aug. 4, and will still have readily available cash of well over US$1 billion, it said. It also said it has $15 billion in bank lines.

It also said that management has been approached by a number of parties in terms of potential financings, and strategic and/or investment options. While there was no guarantee of a deal in the near future, the board was committed to maximising shareholder value, it added.

Noble said it would bring forward the publication of its second-quarter results and the report by PwC on its accounting practices to Monday Aug. 10.

It also said in the statement that contrary to allegations that it needed to increasingly depend on fair value gains for profitability, its fair value gains fell in the second-quarter while operating income and profits remained positive.