Popular app extends encryption to all communication including photos, and Apple devices as well

Popular chat app WhatsApp now encrypts all the communications of its users, making it harder for anyone - including law enforcement agencies - to snoop on conversations and harvest messages.

In a blog post on Tuesday, WhatsApp co-founders Jan Koum and Brian Acton said the messaging service has extended encryption - which started with just text on Android devices in 2014 - to all communications including photos, group chats, videos and calls, and Apple devices.

"No one can see inside that message. Not cyber criminals. Not hackers. Not oppressive regimes. Not even us," said the post. 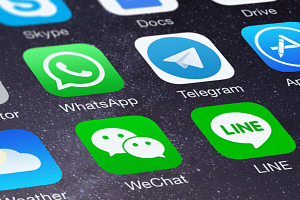 WhatsApp introduces end-to-end encryption: A look at some of the most popular chat apps in Singapore

This means that only the sender and recipient can see the messages. Users need to update their app with the latest version to benefit.

The update comes in the wake of heightened international debate over law enforcement bodies' access rights, and Apple's tussle with the Federal Bureau of Investigation over an order to unlock the encrypted iPhone of a mass shooter.

Acknowledging this in the post, the co-founders said: "While we recognise the important work of law enforcement in keeping people safe, efforts to weaken encryption risk exposing people's information to abuse from cyber criminals, hackers and rogue states."

Mr David Maciejak, head of security software firm Fortinet's FortiGuard Lion research and development team in Asia-Pacific, said that governments need to have physical access to the phone to read encrypted messages on it.

With the limitations of Singapore laws on digital services not based locally, the new WhatsApp feature has little effect here, lawyers believe.

The Criminal Procedure Code in Singapore requires technology companies to disclose information, or any codes they may have to unlock locked or encrypted information.

"But the law extends only to companies with a local presence," said lawyer Cyril Chua of ATMD Bird & Bird. "WhatsApp servers are not located here. Even though WhatsApp's parent company, Facebook, has local presence, it may be hard to enforce the law on Facebook as they are different legal entities," he added.

Also, local telcos Singtel, StarHub and M1 do not store WhatsApp messages on their servers.

Market observer and director of an IT company, Mr Michael Tan, 45, said WhatsApp possibly did this as it does not want to be liable for customer information that governments want to snoop on. However, WhatsApp still has access to other confidential customer information.

"Customer metadata such as when and how often they use WhatsApp, their Internet addresses and frequent chatting buddies can be more powerful than the actual message exchanged, for targeted marketing," said Mr Tan.

A version of this article appeared in the print edition of The Straits Times on April 07, 2016, with the headline 'WhatsApp makes it harder for anyone to snoop on messages'. Subscribe
Topics:
More
Whatsapp Linkedin FB Messenger Telegram Reddit WeChat Pinterest Print Purchase Article Copy permalink