So, last week, when Apple sent out an invitation to journalists, the headline to the message read simply: "See you on the 7th".

With no details, not even a hint for eager techies to sink their teeth into, it was inevitable that the multi-coloured spheres that decorated the invitation would be mulled over, dissected and over-analysed.

So, they deduced - from the resemblance of the spheres to bokeh, or out-of-focus areas in a photo, and the event date, Sept 7 - that all this portends an iPhone 7 with a dual-lens camera.

What is known is that the event will be held at the Bill Graham Civic Auditorium in San Francisco, which can seat 7,000. The huge venue signifies that there will also be other products announced at the same time.

So what can you expect? We scoured the Internet, toured the rumour mills, and came up with what we think Apple will introduce on Thursday (1am on Sept 8, Singapore time).

Apple iPhone 7 and 7 Plus

This is almost a given. With Apple's record of going for a full number upgrade every two years, we will see the iPhone 7 and 7 Plus.

Leaked photos of the purported new models have been making the rounds online for a while. Taiwanese pop star Jimmy Lin, who has a record of leaking new iPhones, has even been photographed using a supposedly new iPhone 7 Plus.

In sum, the leaks indicate that the design will remain largely unchanged design from the iPhone 6 series, except that the antenna bands will no longer be sited on the back.

Well-connected KGI Securities analyst Ming-Chi Kuo says that there will be five colour options - with two new black models in addition to the existing rose gold, gold and silver shades, with space grey replaced by a "dark black" and a "glossy black" version. 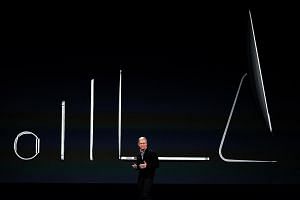 In addition, the base storage will no longer be a paltry 16GB, but 32GB; and the storage capacity of the top tier model will double from 128GB to 256GB.

Mr Kuo says thre iPhone 7 Plus will have 3GB of system memory, further differentiating it from the iPhone 7 which will have just 2GB.

The Plus will feature a dual-lens camera with optical zoom-like function, which will not be offered with the iPhone 7.

Both iPhones will have IPX7 water resistance, like the Apple Watch, which means they will both be rated water-resistant down to 1m for up to 30min.

The original Apple Watch was released almost a year and a half ago. It is rumoured that it will get an incremental upgrade this time.

Design wise, the Apple Watch 2 will remain rectangular. No classic round shape yet for Apple Watch fanciers. In the offing are a faster processor for better performance, a 35-per-cent improvement in battery life, better water-proofing and built-in GPS.

That built-in GPS makes distance tracking possible without requiring runners to lug their iPhones along with them.

With the looming possibility of the demise of the 3.5mm headphone jack in the 7 series iPhones, it will be a great opportunity for Apple's acquisition Beats to release a slew of Lightning or wireless headphones at the event.

The news was actually leaked by the Beats PR team. It sent an email to the French Mac news site iGeneration, saying: "a selection of new Beats by Dre products will be unveiled" at the Sept 7 event.

While iGeneration complied with Beats' request to delete a screenshot of the email posted on the site, no denial was issued.

It's been a while since a Beats release of new headphones, so Thursday's event might be the perfect stage for it, given Apple's determination to consign the headphone jack to history.

The Straits Times will be at the event in San Francisco to bring you the latest Apple announcements.

You can catch the live stream of the event at apple.com from 1am Singapore time on Thursday (Sept 8).