The caveat is that this Samsung device works only with an S6 phone. You cannot pair it with your computer to enjoy virtual reality games or movies.

The Gear VR is basically a shell, housing fixed lenses that amplify the split-screen footage displayed on the phone.

The phone is slotted into the goggle-like frame that sits over your eyes and is held in place by straps that go over and around your head.

The top of the goggles has a scroll wheel for users to focus on the image. On the right side, there is a back button, volume controls and a mini trackpad.

When you put on the goggles, a proximity sensor detects a face and switches the screen on. It will automatically shut down when the goggles are removed.

If a call or text message comes in while the Gear VR is in use, a pop-up message appears. You can connect earphones to the phone to enjoy the content in private.

First-time set-up takes a while. It involves the download of the Oculus app, which is a store for other apps, to your phone. When you launch some of the apps you download there, you will realise that they need to either go through an installation process or download more content.

This is no plug-and-play gadget. I took off and put on the goggles multiple times. There is no indicator as to which apps require additional downloads or which needs Wi-Fi connectivity to work. One file prompted me to download a 2.3GB file and there was no way I was going to leave the unit on my head the whole time.

Content via the Oculus app comes primarily in two forms - games and educational videos. Some require the use of a Bluetooth controller to work.

There are several interesting apps offered, but quite a few exemplify the pitfalls of VR.

For example, the Dreadhalls horror game, which has players explore a massive dungeon, has low-resolution graphics and a low frame rate. Imagine turning your head only to see the change in environment as if there was a massive strobe light flickering overhead.

Transitions in the game were not smooth. This issue, combined with a large immersive world, gave me one of the biggest headaches within the first five minutes of roaming the halls. 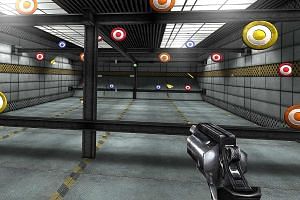 Games on the Gear VR

Samsung also launched a Milk VR app that offers immersive panoramic videos, but it is not available here. There is a way to get the app, but there are two good reasons not to.

One is that you will need to fire up the Oculus app after connecting your phone to a virtual private network (VPN) app that identifies your location as being in the US. Even after the Milk VR app is installed, you need to launch a VPN connection each time you want to access Milk VR.

The second reason is that the content is not worth the effort.

Oculus and Samsung have populated the Oculus app with enough interesting games and apps, though you have to spend more money to buy the good ones.

The Gyeingju VR Museum app, which is free, offers nice 3D models of some historic buildings in South Korea.

I also enjoyed Temple Run VR game, which is also free. Its gameplay is the same as the non-3D version, except that you can now enjoy it from first-person point of view.

Is this the new face of mobile immersion? The potential is there, but no one, not even Samsung, is using it to the fullest.

The downsides: virtual reality will bleed the phone battery pretty quickly with the phone getting pretty hot after just 30 minutes of use.

The lenses on the Gear VR can fog up, so you will need a cloth handy to clean them.

Some games are fun, but do not expect to use the Gear VR for more than 30 minutes at a time.