Its digital watches could take pictures, do sums - and more - as early as the 1980s

Way before the rise of smartwatches, Casio had digital watches that could take pictures and measure your heart rate. There were even Casios with touch panels on which you could do your sums.

What Casio calls "multi-functional digital watches" were on display recently in a special exhibition at the Toshio Kashio Memorial Museum of Invention in Setagaya, a Tokyo suburb.

The museum is housed in the former home of Casio's co-founder, the late Mr Toshio Kashio, who also invented the first all-electric compact calculator.

The exhibition was open to the public by appointment only from June 10 to July 24. On show were more than 40 watches, from Casiotron, its first digital watch, to the more recent Oceanus OCW-500.

Casio's Mr Yuichi Masuda, senior general manager of its timepiece division, who welcomed us at the museum and guided us through the collection, said: "It has always been our history to have all these functions in our watch."

We even got to try out some of the multi-functional watches - all still in working condition.

Of particular interest is the 1983 Casio AT-550 Janus with a glass touch panel that recognises your touch input. It allows you only to draw numbers and such signs as add, subtract, multiply, divide, but it was still intriguing to see a 1980s device able to do the maths on a touch panel.

We also got our hands on the Casio WQV-1, the world's first wristwatch digital camera, released in 2000. It takes only low-resolution black-and-white shots. But it must have been a groundbreaking feat then. It is amazing to look at the picture on the watch display and realise that this gadget is 15 years old.

These devices were, unfortunately, way ahead of their time. They did not sell well and were quickly taken off the shelves.

They attracted gadget lovers, but not the mainstream market, said Mr Masuda.

The more functions Casio added to a gadget, the more complicated it became to use. Ultimately, the multi-functional watches were not user-friendly enough.

And function can and does get in the way of form. "If we pursued a function, the design seemed to be compromised," he said.

Apart from a G-Shock boom in the late 1990s, Casio's watch business had not always performed to expectation, and had failed to beat its 70-billion-yen sales target.

Then in 2004, the company decided to combine its digital technology with analogue movement. 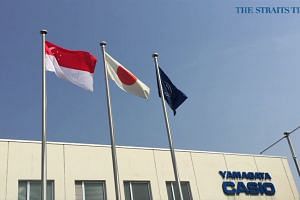 With the lessons learnt from its experience with multi-functional digital watches, Casio appears to be in an advantageous position to tackle the smartwatch.

"We always believe that the wrist is the best place to wear an information device," said Mr Masuda.

The upcoming Casio smartwatch has been in development for four years. The smartwatch development team is headed by Casio's new president, Mr Kazuhiro Kashio, who revealed that fact during an interview with the Wall Street Journal (WSJ) this month.

Unfortunately, we didn't get a chance to talk to him this time.

WSJ reports that Casio's new smartwatch will be released next year and is targeted at leisure and outdoor sports users.

"We are trying to bring our smartwatch to a level of watch perfection: a device that won't break easily, is simple to put on and feels good to wear," Mr Kashio told WSJ.

As history shows, if there is a company that can affect the watch industry in terms of innovation, the smart money could be on Casio.

A version of this article appeared in the print edition of The Straits Times on July 29, 2015, with the headline 'Exhibition shows Casio ahead of its time Wearables'. Subscribe
Topics:
More
Whatsapp Linkedin FB Messenger Telegram Reddit WeChat Pinterest Print Purchase Article Copy permalink