By year end, 3 in 4 households can tune in to digital TV. This will eventually free the analogue bandwidth for other services, and your old PC monitor may be repurposed into a TV

Watching free-to-air digital TV channels in high-definition splendour, with multi-language subtitles and instant access to a seven-day electronic progamming guide is already possible for four out of 10 households here.

A Media Development Authority (MDA) spokesman told The Straits Times that it is on track to expand coverage to all residential households here by next year.

While only a handful of residential estates here could receive the new digital TV signals early last year, already 15 estates, from Jurong East and Bukit Batok in the west to Serangoon and Toa Payoh in the centre of the island, can do so now.

Another 11, including Bedok and Woodlands, will be covered by the end of the year, which means about 75 per cent of all households here will be able to receive digital TV signals then. The migration from analogue singals to digital for free-to-air television channels comes with myriad benefits.

The ability to launch the seven-day TV programme guide on screen with the press of a button not only makes it convenient for viewers to plan their viewing, but also to schedule recordings.

Digital and analogue broadcasts will co-exist, at least for now, but analogue will eventually be turned off, by 2020 at the latest.

Then, the valuable 700 MHz spectrum can be reused for mobile Internet and other wireless broadband services, similar to what is happening in other countries. 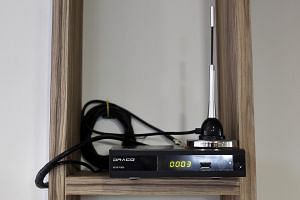 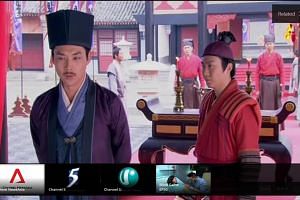 Getting digital TV channels on the move

With analogue TV, users had to position their TV sets near the TV antenna wall socket as they had to run a cable from TV to socket to link up to the shared antenna within each building.

There is no such restriction with digital TV because it uses portable antennae and does not need to share a fixed in-building antenna.

The changeover requires the TV set to have a digital tuner to decode the signals received. This can be integrated into the TV set, as is the case with more than 300 TV models available here.

If yours is an older TV set, you will need to get one of the seven standalone set-top boxes that house digital TV tuner components to decode the digital TV signals (see below for a round-up of set-top boxes).

But if you subscribe to StarHub's or SingTel's pay TV services, you already get free-to-air digital TV channels through your pay-TV provider's connection and do not need to buy anything else.

The beauty of digital TV is that you do not even really need a TV.

Any computer monitor with a standard HDMI input port can now be your TV if you connect it to the TV tuner set-top box and antenna. That is because the monitor or TV simply acts as a display device and all the digital TV circuitry is housed in the TV tuner box.

So don't throw away that old PC monitor yet, because it could double as a spare TV for the kitchen or bedroom.