LAS VEGAS - CES, the world's largest consumer electronics trade show, has always been a battleground for TV makers ready to dazzle with their latest wizardry. And this year's show is no exception.

Even before CES 2019 opens on Tuesday US time (Jan 8), Korean big brands Samsung and LG have already shown off their magic - Samsung with a "modular" 75-inch TV that can be taken apart or put together to form different sizes, and LG with a TV that can roll up or down.

But the most interesting development is Apple allowing both Samsung and LG TVs to "natively support" its AirPlay 2, which means iPhone or iPad users can now easily play videos from iTunes or other video apps to these TVs without an Apple TV streaming console.

Furthermore, Samsung's 2018 and 2019 range of TVs will have a dedicated iTunes app that allows access to one's iTunes movie and TV show library. This is the first time Apple has allowed the iTunes app to be on third-party devices apart from Windows machines.

It represents a massive shift in Apple's "walled garden" approach to content and ecosystems, he added.

On Sunday, the organiser of CES 2019, which runs from Jan 8 to Jan 11, predicted that there would be fewer TVs sold in the United States this year.

CES organiser Consumer Technology Association (CTA) said there would be 42 million TV units sold in the US this year - a 1 per cent decline from 2018. 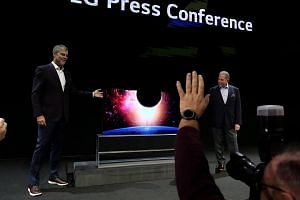 CES 2019: LG shows the future with a rollable TV

But future upgrades will be driven by 4K TVs, with a 14 per cent increase in US sales this year compared to 2018, as well as the latest 8K TVs, said the association.

"Consumers are moving upwards in terms of TV screen size," said Mr Ben Arnold, CTA's senior director of innovation and trends, during a presentation on Sunday.

But with 8K TVs having sizes of 65 inches and larger, Mr Arnold predicted that 8K TVs will make up the majority of large-screen TVs sold.

This is because of the "nature of premium customers buying it at the higher price point and the appeal of the visual experience", he added.

Both Samsung and LG have unveiled 8K TVs with sizes up to 88 inches and 98 inches respectively. Meanwhile, Japanese tech giant Sony also launched its first 8K LCD TVs with the Bravia Master Series Z9G, which will be available in 85 inches and 95 inches.

Samsung's new modular product, the 75-inch 4K microLED TV, is still in the prototype stage, while LG's Signature Oled TV R, its rollable TV, will go on sale sometime this year, though its pricing is not confirmed.

The LG Signature Oled TV R has a big sound bar that doubles as a stand for the rolling TV to appear and disappear. When in Full View mode, it becomes a 65-inch 4K Oled TV.

It also has a Line View mode that displays modes like clock or music, while a Zero view mode has the entire TV retracted and becomes a full-blown 100W front-firing Dolby Atmos audio system.

"The rollable Oled TV is certainly a very fascinating product in the ultra-Premium space like the wallpaper Oled that LG launched a few CES ago. But at the upper end of available price points, it will sell relatively few sets," said Mr Gagnon.