Companies using crowdfunding not just to raise money but also to gauge interest, drum up publicity

Crowdfunding began as a means for small, nascent companies and individuals to raise funds to get a project off the ground.

But now, companies - even established ones - are using it for a variety of reasons, such as gauging market interest, engaging a wide spectrum of potential customers and drumming up publicity. 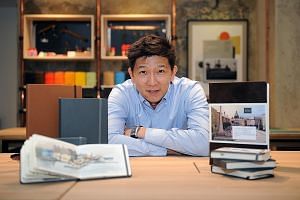 He turned to netizens to fund The Perfect Sketchbook

StarHub launched Crowdtivate in July last year to "create a platform to curate the best ideas in Asia from start-up companies, entrepreneurs and even the regular person-in-the-street", said Mr Stephen Lee, head of innovation, investment and incubation at StarHub.

Since its launch, the platform has seen 53 crowdfunding campaigns and 300 crowdvoting campaigns, which canvass for opinions instead of funds. The overall success rate is 20 per cent, compared with 36 per cent of Kickstarter projects last year.

"Our findings will help us evaluate whether certain products should be marketed further or, in some cases, whether improvements should be made to the product before it hits a wider market."

Globally, crowdfunding has been steadily on the rise. There are numerous online platforms that bring together backers and projects, such as Indiegogo, RocketHub and Kickstarter. In 2012, Kickstarter saw 2.24 million backers pledging US$320 million in total. Last year, this climbed to US$529 million from 3.3 million backers.

Crowdfunding campaigns can also be used to raise the profile of a soon-to-be-launched product.

In October, local indie game studio PD Design Studio turned to Kickstarter to fund its upcoming video game, Dusty Raging Fist. The studio set a target of A$60,000 (S$61,700) and, by the time the campaign closed on Nov 20, managed to raise A$7,200 in pledges.

Studio director Kenneth Poh said: "We knew... the chances of getting funded were slim as we don't have a lot of marketing power."

But hitting the monetary target was just one of several objectives. He also hoped to raise the profile of the game and to get it the go-ahead on Steam Greenlight, a platform where users can vote for which games should be released on online video game retailer Steam.

But running an effective crowdfunding campaign is not easy. Mr Daniel Chin is the founder and chief executive of Sanho Corporation, an electronics company. He has run nine crowdfunding projects.

He warns that putting together and managing a campaign can be time-consuming as it means dealing with possibly thousands of backers.

The publicity garnered can also be a double-edged sword. "All the positive publicity generated... can quickly turn into negative publicity and a public relations disaster if you fail to meet your promises," he said.

The onus is on backers to be realistic about crowdfunding.

Dr Walter Theseira, an economist at SIM University, said: "It's basically a risky way of supporting a product that might otherwise not get made. If you believe in the product or the team, go ahead, but you need to have realistic expectations."

A version of this article appeared in the print edition of The Straits Times on December 02, 2015, with the headline 'Turning to the crowd for more than funds'. Subscribe
Topics:
More
Whatsapp Linkedin FB Messenger Telegram Reddit WeChat Pinterest Print Purchase Article Copy permalink